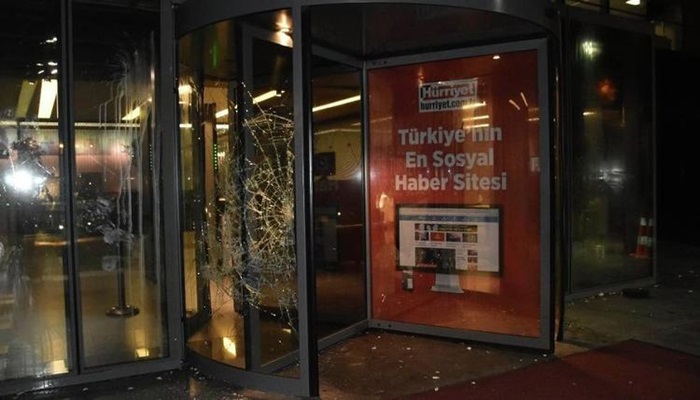 Notorious Turkish mob boss Sedat Peker has confessed to involvement in a 2015 attack on the İstanbul offices of the Hürriyet daily on the orders of a lawmaker from the ruling Justice and Development Party (AKP), in the latest installment of videos he has been releasing on YouTube since May 2.

“Some friends from our youth branch will be there [Hürriyet headquarters], but they’re not professionals. So, if you could…” Peker quoted the AKP lawmaker as saying and added that he sent some of his followers to the daily’s headquarters in İstanbul to carry out an attack on behalf of the government.

“Hürriyet, I had them raid your [building]. I confess to a crime. You can check the cell phone signals and find out which lawmaker called me before the attack. … To the prosecutors out there: Here’s my confession as evidence. I did it. An [AKP] MP told me to,” Peker said.

The mafia leader implied that the process that ended with the Demirören family – close to President Recep Tayyip Erdoğan – purchasing media outlets owned by the Doğan Media Group, which was the largest media group in the country, in March 2018, started with the attack in 2015.

“Aydın Doğan was an old man. He feared for his life, and there were criminal cases against him,” Peker said in reference to the owner of Doğan Holding.

The mob boss also addressed Demirören Group Chairman Yıldırım Demirören, saying: “I had a hand in the position you’re currently holding. I will follow your every step.”

Later in the video Peker accused Demirören and his media group of biased coverage of a police raid on his villa in İstanbul’s Beykoz district as part of an organized crime operation in April. “You made it seem like murder weapons were found in my wife’s bedroom,” he said.

Peker’s confession came after many journalists in Turkey, mainly pro-government reporters, had argued that the claims of a mob boss such as Peker shouldn’t be taken seriously.

“The so-called journalists, did you expect such claims to be made by a Muslim preacher or a cleric? Only those who are dirty can talk about dirty work. The biggest scandals on earth didn’t erupt based on the claims of regular people,” he argued.

Peker also talked about Turkish Interior Minister Süleyman Soylu, about whom he made a number of revelations in previous videos that point to Soylu’s links to the mafia.

Peker claimed on Thursday, in the sixth installment of his video series, that Soylu made Erdal Aras –- referred to by Peker as a follower -– a member of the Democrat Party (DP)’s Central Decision and Management Board (MKYK) when he was leading the party, although he knew that Aras had a criminal record.

“Everybody knows that Erdal Aras has a criminal record. Didn’t you make him an MKYK member after you became chairman [of the DP]? How did you pull it off when he has a criminal record? I promise God that you will be arrested and will receive at least 10 aggravated life sentences. Mark my words,” Peker said, addressing Soylu.

The mafia boss further claimed that Soylu issued wiretap warrants for 613 people after he started releasing videos on YouTube, adding that the minister has also had some people followed, including presidential spokesperson İbrahim Kalın, who has been expressing support for Soylu in light of Peker’s recent claims.

“My data is solid. Some day a prosecutor will come forward [and draft an indictment against Soylu]. I promise God this will happen, believe me,” Peker said.

Peker, the head of one of Turkey’s most powerful mafia groups, has since early May been setting the country’s political agenda through videos he posts on YouTube, each of which reach over a million viewers on the first day of their release. The mafia boss, who lives in Dubai and is the subject of an outstanding warrant in Turkey, has been making shocking revelations about state-mafia relations and drug trafficking and murders implicating state officials.