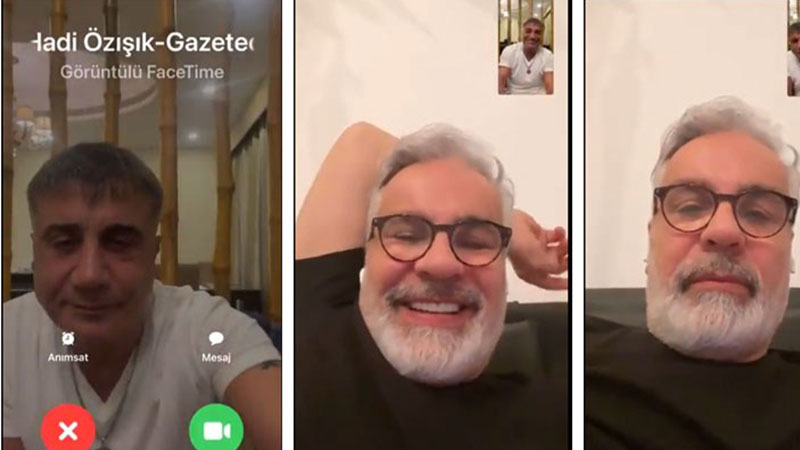 Peker on Tuesday released two videos on Twitter showing his phone calls with Hadi Özışık, owner of the Internethaber news website, as proof of his recent claim that the journalist mediated between him and Soylu in order to stop him from releasing new videos on YouTube.

Peker, the head of one of Turkey’s most powerful mafia groups, has for the last two weeks been setting the country’s political agenda through videos he posts on YouTube, each of which reach over a million viewers on the first day of their release. The mafia boss, who lives in Dubai and is the subject of an outstanding warrant in Turkey, has been making shocking revelations about state-mafia relations and drug trafficking and murders implicating state officials.

The mafia leader released footage of the calls after Özışık, known for his close links to Soylu, denied his claims regarding mediation between him and Soylu through a message he sent to opposition Halk TV after the channel reported on an opposition MP’s remarks demanding that Soylu account for the allegations.

Halk TV quoted main opposition Republican People’s Party (CHP) deputy group chairman Özgür Özel as saying, “Did a journalist very close to Soylu speak to Sedat Peker or not? … Did that journalist make Süleyman Soylu watch one of Peker’s videos before its release and then tell Peker on Soylu’s behalf not to release it?”

Peker released the footage of one of his video calls with Özışık with a note saying, “My dear friends: The Hadi-Süleyman Özışık brothers, the owners of the İnternethaber website, have denied that they mediated between Süleyman Soylu and me. … I don’t play tricks on anyone; however, I don’t let anyone disgrace me, either.”

“I warn everyone whose names I mention in my videos. Don’t refute me [my claims]. I will disgrace all of you,” the mob boss said in a tweet in which he released the other footage.

The conversation between Özışık and Peker in the footage reveals that the journalist watched the fourth installment of Peker’s videos in which he made several claims against Soylu after the minister publicly said he was “dirty mafia.”

“Why did you mention my name? My name in that video will cause me trouble. … You exposed what I told you [about Soylu],” Özışık is heard saying in the call.

“[Because] you are the witness in this case. You went to see Mr. Süleyman and the issue came up. That’s what I said,” Peker replies.

Özışık says that it was his brother Süleyman Özışık who went to meet with Soylu and that there would be no problem if they removed that part of the video where Peker says his name.

In the other phone call Peker asks why Soylu insulted him in the first place and says, “Didn’t this guy tell you, ‘Both our president and I love him [Peker] very much’ just five months ago?”

Peker continues, referring to President Recep Tayyip Erdoğan’s son-in-law Berat Albayrak, “We became enemies of Mr. Berat because of him [Soylu]. … He was my ticket back [to Turkey]. I was supposed to come back in April. I can accept being called ‘the leader of a criminal organization,’ which I also hate, but what does he [Soylu] mean by saying ‘dirty mafia’?”

To which Özışık replies, “I couldn’t understand why he [Soylu] is doing this. I couldn’t figure it out. You’re right about this.”

When Peker tells him he will release a video about Soylu, Özışık says: “Think this over carefully. … I’m still friends with you. I won’t be offended by this, do whatever you want.”

Once a staunch supporter of Erdoğan, Peker left Turkey following the publication of a report related to arms trafficking to Syria that was allegedly carried out under the guise of humanitarian aid. Although police recently raided his villa in İstanbul’s Beykoz district as part of an organized crime operation, they failed to detain him since he was out of the country.