A secret Turkish government document obtained by Nordic Monitor has revealed that Turkey privately acknowledged it had jailed dozens of journalists even though it stuck to the official line denying the imprisoning of any journalist.

The official was asking the İstanbul Chief Public Prosecutor’s Office to provide details on the cases of imprisoned and prosecuted journalists because the Committee of Ministers of the Council of Europe was pressing Turkey for detailed information on the cases.

The number of journalists who were imprisoned and prosecuted in other provinces across Turkey is not listed in the Justice Ministry document. Presumably, Açıkgül also wrote letters to prosecutors in other provinces for details of jailed journalists’ cases there as well, but Nordic Monitor was unable to obtain copies of those letters.

According to the Stockholm Center for Freedom’s “Jailed and Wanted Journalists in Turkey” database, 174 journalists are behind bars in Turkey and 167 are wanted and either in exile or at large. The database was last updated on April 14, 2021. 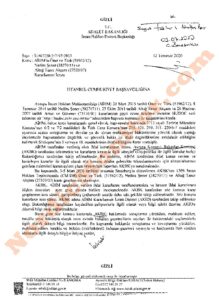 Turkish President Recep Tayyip Erdoğan and other government officials have publicly and repeatedly denied that there are journalists in Turkish prisons. Speaking at a campaign rally in Denizli province on December 15, 2018, Erdoğan said: “The lie that many journalists are in prison is constantly put to us. There is no such thing.” He added that those who make an issue out of this harbor hostility to Turkey and the Turkish nation.

The document detailed how the Committee of Ministers, the Council of Europe’s decision-making body, has pressed Turkey for the implementation of European Court of Human Rights (ECtHR) judgments in 66 recent cases that involved violations of freedom of expression.

At the 1,369th human rights meeting of the Ministers’ Deputies held in Strasbourg March 3-5, 2020, the participants drew attention to a group pf cases in which Turkey was found to have violated articles of the European Convention on Human Rights (ECHR).

The deputies emphasized that journalists expressed views that did not incite hatred or violence, highlighted Turkey’s unjustified and disproportionate interference into journalists’ freedom of expression, made a note of the pre-trial detention of journalists in the absence of relevant and sufficient reason and agreed with ECtHR ‘s view that criminal proceedings initiated against journalists under various articles of the Criminal Code and Anti-Terrorism Law did not meet the criteria of the ECHR articles.

The participants agreed that “the problem of the disproportionate use of the criminal law in Turkey to punish journalists and other persons who express critical or unpopular opinions has been pending before the Committee in relation to various judgments for over 20 years.”

The Council of Europe body also took a shot of what the Turkish government called reform in freedom of expression and said, “It does not appear that the measures taken so far have been sufficient to remedy the problems,” adding, “Prosecutors and the lower courts continue to apply the criminal law without ensuring respect for freedom of expression.”

The European rights body requested that Turkish authorities provide detailed statistical information showing the total number of prosecutions and convictions for offenses involving violation of freedom of expression. It asked specially for information on the number of journalists prosecuted, convicted and held in pre-trial and post-conviction detention, with details of the allegations involved.

The participants also instructed the Council of Europe Secretariat to prepare a draft interim resolution on Turkey for consideration by the Committee of Ministers at its next meeting in June 2021. They underlined that violations of freedom of expression and the imprisonment of journalists are issues that have been before the Council of Europe for a long time and that there has been no concrete progress in Turkey with respect to these problems.

Apparently feeling the heat from the Council of Europe, the Justice Ministry, which represents Turkey at the European rights body on legal issues, felt the urgent need to look into cases of jailed and prosecuted journalists. The document signed by Açıkgül represents the government’s effort to compile data in order to mount a defense at the next meeting and prevent the Council of Europe from advocating for the cases of jailed and prosecuted journalists.

The human rights meeting of the Ministers’ Deputies was held under the chairmanship of Panayiotis Beglitis, deputy for the minister for foreign affairs of Greece. Turkey was represented by the largest delegation of all the participants, with 11 people. In addition to Açıkgül, the Turkish delegation included Kaan Esener, the Turkish ambassador and permanent representative of Turkey at the Council of Europe. Esener was identified by Nordic Monitor as having run a worldwide spying campaign against President Erdoğan’s critics and opponents including exiled journalists in nearly 100 countries.

The names of journalists jailed and prosecuted in Istanbul in the Justice Ministry document were listed as follows: