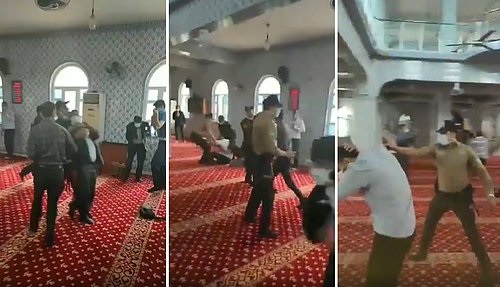 Turkish police on Monday raided a mosque in the southeastern province of Gaziantep and detained eight followers of an anti-government religious group who wanted to perform a religious ritual peculiar to the Muslim holy month of Ramadan, Turkish media outlets reported.

The detainees were the followers of the Furkan Foundation, whose leader is an outspoken critic of the policies of the ruling Justice and Development Party (AKP).

The police raided the mosque wearing their shoes, which is regarded as disrespectful, and used pepper spray and force to disperse the Furkan followers on the grounds that they were violating coronavirus measures.

Furkan Foundation leader Alparslan Kuytul earlier announced that his followers would perform itikaf, which means to isolate in a mosque or at home with the intention of dedicating your time solely to the worship of Allah in the last 10 days of Ramadan.

The AKP, which had previously imposed partial, shorter lockdowns and weekend curfews in a bid to reduce the closures’ impact on the economy, decided to impose a three-week full lockdown after Turkey saw COVID-19 infections averaging around 60,000 per day during the peak week in April.

New restrictions, which took effect on the evening of April 29 and will last until May 17, will prohibit people from leaving their homes, except to shop for groceries or meet other essential needs, during the remainder of Ramadan as well as the three-day Eid al-Fitr holiday.

Furkan members criticized what they described as the double standards against their group, saying the AKP did not observe coronavirus measures when it held party congresses with the attendance of thousands of people.

A Furkan follower named Yakup Şahin tweeted: “Despite the lack of any bans, police forced our brothers who were performing itikaf out of the mosque. This was completely arbitrary. We have been performing itikaf for 10 days in the mosque closest to our homes since 2004. It’s permissible to hold a football match with 5,000 spectators but not to perform itikaf with 5-10 people. Shame on you.”

“I strongly condemn the Gaziantep police, who forced those who were performing the itikaf prayers out of the mosque,” said Kuytul, following the detention of his followers.

After 22 months of incarceration, Kuytul was released pending trial in December 2019 and  was acquitted in November 2020 of charges of disseminating propaganda for a terrorist organization.

Kuytul claims he was targeted for criticizing a crackdown launched by President Recep Tayyip Erdoğan on the Gülen movement, a faith-based group inspired by Muslim cleric Fethullah Gülen.

Erdoğan accuses the group of orchestrating a coup attempt in 2016 when rogue soldiers attempted a takeover that saw more than 250 killed.

Gülen and the movement deny any involvement in the abortive putsch, and critics accuse Erdoğan of targeting dissent under the pretext of an anti-coup fight.