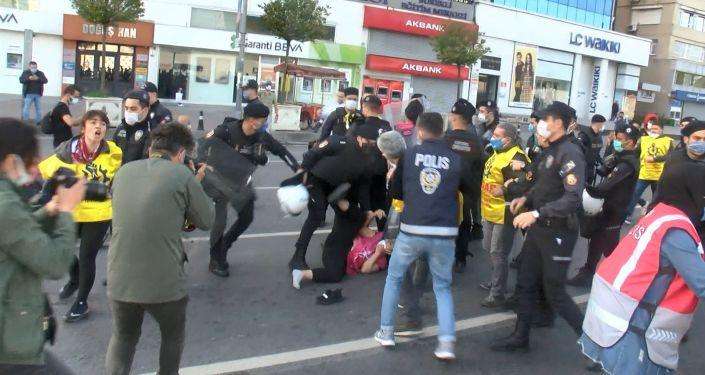 Police detained 212 demonstrators in İstanbul, including labor union members and university students, governor’s office said on Saturday, for attempting to stage a May Day rally in defiance of recently imposed coronavirus lockdown measures and a ban on protests in a historic square.

The İstanbul branch of the Progressive Lawyers Association (ÇHD) early on Saturday announced on Twitter that at least 60 of the protestors were detained in Mecidiyeköy near Taksim Square, where police had increased its presence and surrounded the Republic Monument and Gezi Park with barricades.

The police also closed all roads leading to Taksim Square, which holds symbolic value for Turkey’s labor movement. During a 1977 May Day event, 34 people were killed there when shots were fired into the crowd from a nearby building. Due to security concerns, a ban on May Day demonstrations in Taksim has been in effect for several years.

A number of university students who tried to march towards the square holding a placard that read “From campus to streets, we will win” were among those detained early on Saturday following police intervention in their protest, local media reports said, adding that four protestors detained in Mecidiyeköy were members of the Revolutionary Anarchist Activity (DAF) labor union.

According to Turkish media reports, members of the Limter-İş, İnşaat-İş, Dev Yapı-İş and Dev Turizm-İş unions, all part of the Confederation of Progressive Trade Unions of Turkey (DİSK), were also among those detained on Saturday.

Working conditions in Turkey have become more difficult as COVID-19 has added to the challenges facing laborers in the country, who celebrated May Day amid the strictest coronavirus measures yet, the Cumhuriyet daily said in a Saturday report.

According to a report by DİSK, 16.4 million of a total of 26.8 million employees in Turkey work in sectors that are exempt from the latest lockdown restrictions, while 6 million of them work in businesses partially exempt from the measures. The workplaces of 4.4 million are closed during the 17-day lockdown.

The number of unemployed in Turkey has surged by 3 million in the past year, Cumhuriyet said, underlining that the country currently has nearly 7 million minimum wage workers. Turkey’s net minimum wage for 2021 is TL 2,826 ($340), which is the lowest figure in US dollars for a monthly net minimum wage in the last 11 years.

According to Turkey’s Social Security Institution (SGK), a total of 176,662 workers were fired from their jobs in 2020 in spite of a ban on layoffs aimed at limiting the impact of the COVID-19 pandemic on employment and the economy in general that was introduced in April 2020 for three months but then extended by Erdoğan several times and is currently in effect until May 17.

Turkey’s unemployment rate rose to 13.4 percent in February, which corresponds to 4.2 million people, while the composite measure of labor underutilization rate, consisting of time-related underemployment, potential labor force and unemployment, was 28.3 percent, according to the latest data from the Turkish Statistical Institute (TurkStat).