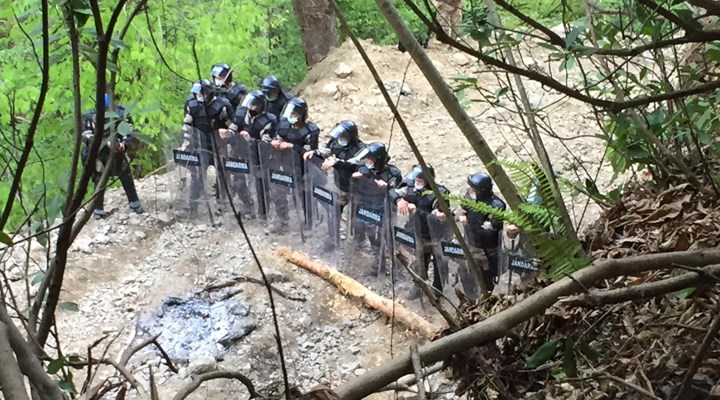 At least five people were detained in northern Rize province early on Saturday when a group of villagers, most of them women, protesting the opening of a stone quarry by a pro-government company faced heavy intervention by gendarmes, the Cumhuriyet daily reported on Saturday.

Local media said nearly 16 million tons of stone for a landfill in Rize city will be quarried by Cengiz Construction, a company with close ties to the ruling Justice and Development Party (AKP) that has undertaken numerous infrastructure projects over the past decade.

The quarrying in the İşkencedere Valley, located in İkizdere, started over a week ago, despite protests by locals arguing that the project would harm their means of earning a living as well as natural resources in the region, which is considered one of the most precious natural beauties of Turkey’s northeast due to the dense forest cover in the area.

Gendarmes on Saturday forced the villagers, who chained themselves to trees, out of the valley and detained at least five of them, according to an announcement on social media by the Federation of İkizdere Associations, which has played an important role in the villagers’ protests.

The NGO argues that the quarrying would harm the ecological system of the valley by reducing the amount of water in it and contaminating what’s left of it. It would also endanger agriculture and animal husbandry in the region, the main sources of income for the locals, the group adds.

The AKP’s Rize MPs, Hayati Yazıcı and Osman Aşkın Bak, on Saturday came to the area to convince the locals of the importance of the quarry and told them that they could be further briefed on the project if they wished, local media reports said.

The villagers, however, told Yazıcı and Bak that they have enough knowledge about the project and still don’t want it to be implemented. The villagers also told the officials that gendarmes had earlier used disproportionate force on the protestors, dragging women on the ground and using pepper spray from a distance of 30 to 40 centimeters.

“The heavy equipment is now able to work under the protection of the gendarmes. Unfortunately, the soldiers of this country choose to protect the machinery of a construction company over their own citizens,” Musa Yılmaz, deputy chair of the Federation of İkizdere Associations, told the Evrensel daily.

Lawmaker Mahmut Tanal from Turkey’s main opposition Republican People’s Party (CHP) who on Saturday paid a solidarity visit to locals protesting the quarrying activities of Cengiz Construction, told Evrensel that the villagers were just trying to defend their rights, without harming public officers, as part of a resistance against a project supported by the ruling AKP “for financial gain.”

Cengiz Holding first came to public attention in Turkey in late 2013, when the country was shaken by news of two corruption investigations in which senior ruling AKP politicians were involved.

The company’s owner, Mehmet Cengiz, who has been awarded numerous public contracts, including the construction of İstanbul’s third airport, during the 18 years of AKP rule, was heard in wiretapped phone conversations cursing the Turkish people.

Opposition parties accuse Cengiz, among others, of bid-rigging and claim he is among Turkey’s biggest tax evaders.