Hatice Duman, the former owner and news editor of the socialist Atılım (Leap) weekly who has been behind bars since 2003, has said her 18-year-long legal proceedings resembled a theatre play authored by those in power who “gave orders” for her ongoing imprisonment “behind the scenes.”

Currently being held at the Bakırköy Women’s Closed Prison in İstanbul, Duman on Tuesday answered questions sent to her by Jailed Journos, an independent organization aiming to help imprisoned press members in Turkey make their stories heard.

“When I look at my trial as a whole, I see that my case has been stuck in a vicious cycle. The 18-year-long legal proceedings resembles a theatre play. There was a decision given behind the scenes by those in power,” Duman said, referring to President Recep Tayyip Erdoğan’s Justice and Development Party (AKP) government.

“When the curtain rises, this whole play of prosecution ends in that same decision. This is a summary of the legal system in our country,” she added.

Duman had been jailed pending trial for years based on a witness statement that was later recanted, until she was handed down an aggravated life sentence in 2011 on charges that included membership in the Marxist-Leninist Communist Party (MLKP) –- an extremist group outlawed by Ankara -– and attempting to overthrow the government. 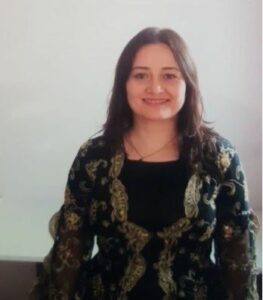 The local court’s sentence was upheld by Turkey’s Supreme Court of Appeals in 2012. In 2015 the Constitutional Court, whose rulings are binding for all lower courts, ruled in favor of Duman and sent the case back for retrial. However, the local court in İstanbul ignored its order. The top court again ruled in favor of the jailed journalist in 2020, saying that her right to a fair trial was violated. The local court still refuses to retry her.

In an answer to a question regarding ill-treatment in prison, Duman said it was impossible to recount all such incidents she had faced in the past 18 years and that she could only relate some of them.

“I was strip-searched upon entering Gebze Prison [in Kocaeli province]. Nearly 10 guards took off my clothes. They [government officials] don’t accept the existence of strip-searches in Turkish prisons, but they have been taking place [in Gebze] in a room that can’t be seen by the jail’s camera system,” Duman explained.

She further said the COVID-19 pandemic had been adding to the challenges facing the inmates for the past year. “Very few of the measures imposed amid the pandemic are actually aimed at curbing infections. The suspension of open visits, bans on receiving newspapers and closing the infirmary to nearly all inmates are restrictions that have nothing to do with COVID-19.”

Duman underlined the importance of the resistance of a small number of dissident journalists in Turkey, where the vast majority of media outlets have been serving as government mouthpieces.

“I’m honored to be part of that resistance. It adds meaning to our struggle to overcome the obstacles in our search for the truth,” she said.

According to the Stockholm Center for Freedom’s “Jailed and Wanted Journalists in Turkey” database, 174 journalists are currently behind bars in the country, while 167 are wanted and are either in exile or remain at large.