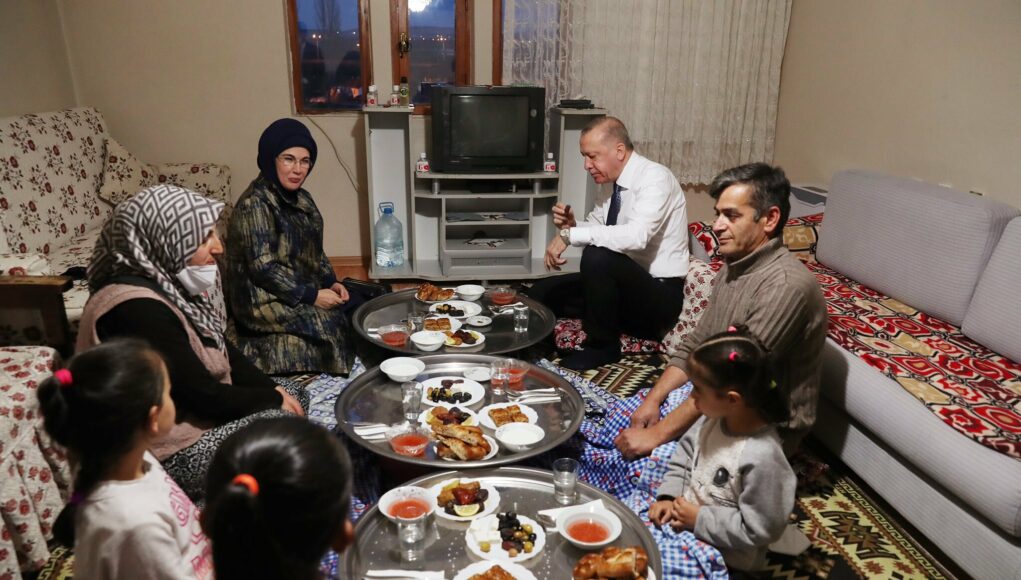 Turkish President Recep Tayyip Erdoğan and his wife Emine Erdoğan attended a fast-breaking dinner hosted by a Turkish family in violation of newly tightened coronavirus restrictions recently announced by the president himself for the holy month of Ramadan.

The president and his wife on Wednesday were guests at a traditional iftar dinner hosted by a family living in Ankara’s Mamak district, according to a report by the state-run Anadolu news agency.

Photos of the event posted on the official Twitter account of the Turkish Presidency on Wednesday showed three traditional floor tables with Erdoğan and his wife seated around one of them and four members of the family hosting the dinner sharing the other two.

Erdoğan on Tuesday announced a tightening of coronavirus restrictions that include earlier evening curfews mainly in order to prevent people from arranging crowded gatherings for iftar dinner, the evening meal consumed by Muslims to end the daily fast at sunset during the holy month of Ramadan, which is currently being observed by Muslims around the world.

Evening curfews will now go into effect nationally at 7:00 p.m. — instead of the current 9:00 p.m. — and stay in place until Ramadan celebrations end in mid-May, Erdoğan said.

As part of the Ramadan measures, the dine-in service at restaurants and cafes that had been partially reopened at the start of last month were closed, weddings and other big social engagements were canceled and the use of public transport was restricted for those over 65 and under 20 years of age.

The new rules came as the nation of 84 million saw its daily virus infection numbers soar past 60,000 as it battles a third wave that was exacerbated by the rapid spread of the more infectious British variant of the virus.

The 62,797 new virus cases and 279 fatalities reported by Turkey on Wednesday were both the highest since the pandemic reached the country more than a year ago.