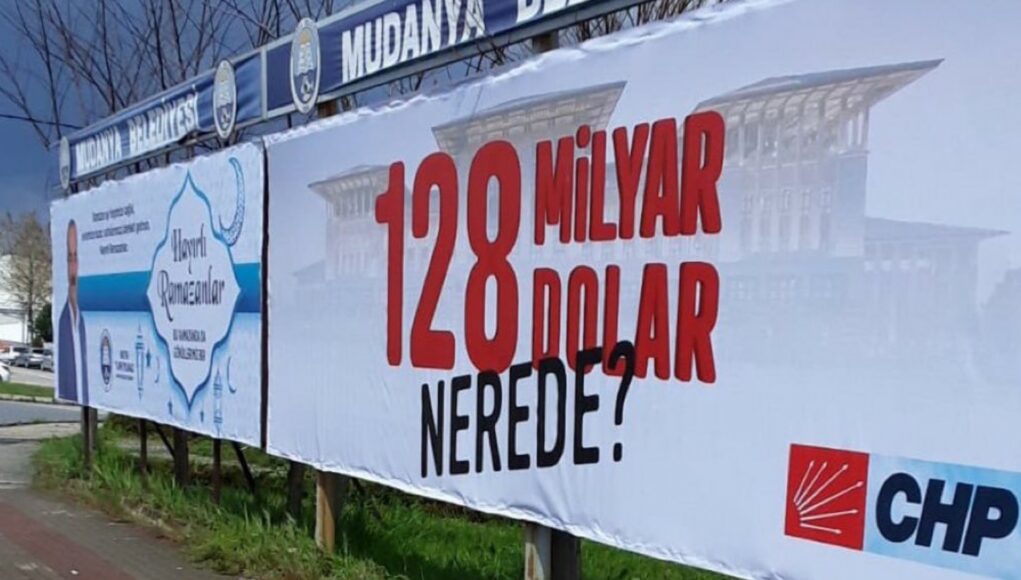 Alleging the insult of President Recep Tayyip Erdoğan, the Mudanya Chief Public Prosecutor’s Office is investigating the installation of billboards in Bursa’s Mudanya district that question $128 billion claimed by the opposition to have been sold from the Turkish Central Bank’s (TCMB) reserves in 2019-2020, local media reported on Friday

The investigation was launched after the appearance of six billboards erected by the Mudanya District Municipality, run by the main opposition Republican People’s Party (CHP), that show the silhouette of the presidential palace in the background with “Where is the $128 billion?” written on it.

The Bursa Governor’s Office said in a statement on Friday that the six billboards were taken down on the orders of the Mudanya Chief Public Prosecutor’s Office.

“Where is the $128 billion?” CHP leader Kemal Kılıçdaroğlu tweeted following the development.

Oğuz Kaan Salıcı, the party’s İstanbul MP, also criticized the move to take down the billboards. “We will continue to ask that question you don’t want the citizens to see,” he vowed on Twitter, addressing Erdoğan and his Justice and Development Party (AKP) government.

Although Erdoğan and his monetary policymakers are trying to downplay the issue, the public, experts and the opposition have been demanding to know where the $128 billion has gone.

Albayrak oversaw a policy in which state banks sold some $128 billion in 2019-2020 to stabilize the Turkish lira. The central bank backed the interventions with swaps, and the bank’s net forex reserves subsequently tumbled by about three-quarters last year alone.

“They’re hung up on where the money is. The money is in the people’s Treasury and the central bank. Nothing was lost,” Erdoğan also said on March 10, in reference to the opposition politicians, while addressing lawmakers from his AKP in parliament.

However, Erdoğan’s remarks didn’t reflect the truth, local media reports said then, since the TCMB’s net forex reserves had risen to $13.93 billion as of Feb. 26, according to bank data, and its outstanding swaps were $40.67 billion as of March 9, which meant the reserves were in deeply negative territory once the swaps were deducted.