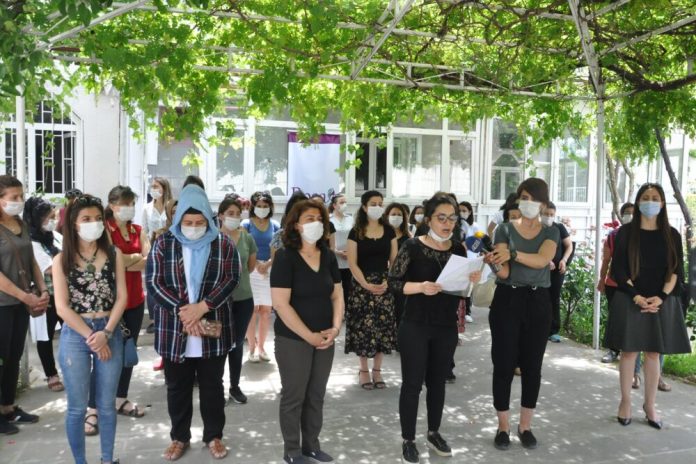 Six women’s rights activists who were among 26 detained in a police raid on the Rosa Women’s Association in southeastern Diyarbakır province on April 5 have been arrested on terrorism-related charges, the Stockholm Center for Freedom reported, citing the Karınca news website.

The reason for the raid on the association remains unknown. In a statement on social media, the Rosa Women’s Association said the police broke down the door of the building and began searching their property.

“The police entered the building while no one was there. We are the victims of the ruling [Justice and Development] party’s continuous acts of intimidation against women. We [women] are here, and we will always be here,” they said.

Satiye Ok, a member of the Socialist Women’s Committee (SKM), Leyla Akgül, a former advisor to pro-Kurdish People’s Democratic Party (HDP) deputy Dersim Dağ, Ayşen Kanus, Nurşen Akbal, Şehriban Zuğurli and Figen Aras were arrested for alleged membership in a terrorist organization. Eight others remain in detention, while one of the women was put under house arrest and the rest were released pending trial.

In solidarity with the arrested women, Ebru Özel from the Ankara Women’s Platform said they would continue their fight for women’s rights. “The government should accept that it cannot suppress the women’s movement with such raids and arbitrary arrests,” she said. “We demand all our friends be released immediately.”

Speaking at an event in Ankara, Özel emphasized that the Rosa Women’s Association had done commendable work in protecting women from violence and sexual harassment. She added that associations such as Rosa were essential in fighting discrimination against women and gender equality.

“The recent raid on Rosa has shown once again that violence against women is political,” said Özel. “Women who have not remained silent about the recent developments, and especially the withdrawal from the Istanbul Convention, have triggered the government’s anger and hate.”

The Convention on Preventing and Combating Violence Against Women and Domestic Violence, widely known as the Istanbul Convention, was signed by 45 countries and the European Union in 2011 and requires governments to adopt legislation prosecuting perpetrators of domestic violence and similar abuse as well as marital rape and female genital mutilation.

Turkey was the first member state to ratify the CoE convention, which was opened for signature in Istanbul during Turkey’s chairmanship of the organization 10 years ago.

In a move that attracted widespread criticism from several countries, international organizations and rights groups, Turkey withdrew from the Istanbul Convention, through a presidential decree issued by President Recep Tayyip Erdoğan on March 20.