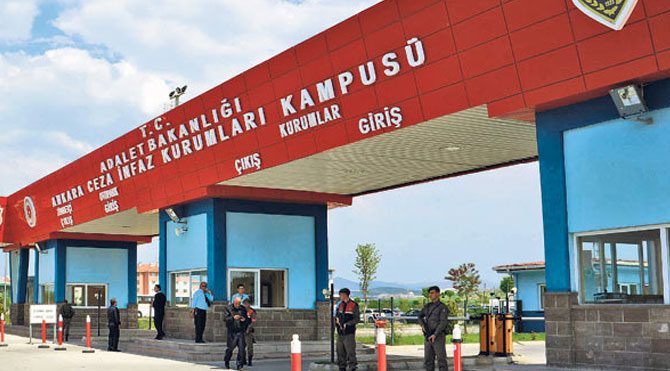 Inmates are suffering from freezing temperatures, foul drinking water, poor treatment and the negative effects of the COVID-19 pandemic in Ankara’s Sincan Prison, said a report drafted by the Turkish Parliament’s Sub-committee on Prisoners Rights, the Stockholm Center for Freedom reported.

According to Turkish media, the sub-committee said inmates were living in inhumane conditions and that the pandemic had lowered the already low standards of the prison.

Deputies from the main opposition Republican People’s Party said drinking water was tainted and insufficient for the number of inmates. Moreover, due to overcrowding food was also found to be insufficient. Deputies also said inmates did not have access to doctors and that cells were not properly heated in winter.

İlhan Öngör of the Human Rights Association (İHD) said sick inmates were suffering in particular, as their medical treatment has been suspended during the pandemic. “Inmates have languished in jail with untreated ailments for up to nine months without being admitted to a hospital,” he said, speaking to Deutsche Welle Turkish service (DW). “Their condition has deteriorated.”

Deputies on the sub-committee pointed out that sick inmates were humiliated during physical examinations as they were handcuffed during the procedure. “The enforcement of security measures should be proportionate,” said the report.

Emphasizing that inmates had the right to see their families during visiting hours, the report said the prison administration had failed to set a standard time for visitation. “Visiting hours should not be restricted,” said the report.

According to the report there has been no improvement to the juvenile ward at Sincan Prison. Although the committee members were not able to access the ward, they were informed by inmates that the conditions were no different than in the rest of the prison.

In the women’s ward, the sub-committee said female inmates were required to make clothes but were not paid for their work.

According to a news report by DW, conditions in Turkish prisons have deteriorated even further due to pandemic-related measures. Restrictions to socialization and family visits were of particular concern.

“We are seeing inmates crowded into jails and enduring growing psychological pressure,” said Berivan Korkut of Turkey’s Civil Society in the Penal System Association(CISST). “Their suffering is made worse as jails are no longer monitored amid the pandemic, leaving wardens to do as they please. We have been receiving reports of grave abuses and misconduct.”

Inmates in the past have written to opposition deputies complaining about their suffering in prison. They have mentioned being mistreated by prison personnel as well as overcrowding and unsanitary conditions.