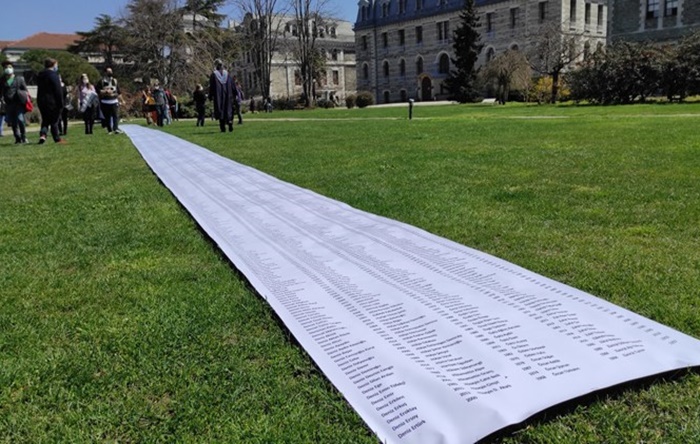 A total of 5,000 graduates of İstanbul’s prestigious Boğaziçi University have jointly called on new rector Melih Bulu, a member of the ruling Justice and Development Party (AKP) whose appointment by President Recep Tayyip Erdoğan sparked ongoing protests at the university over three months ago, to resign, local media reported on Wednesday.

The statement calling for Bulu’s resignation, which was prepared by the Alumni Initiative for Boğaziçi University (BUİM) and the names of the 5,000 signatories were displayed on Wednesday in the square on the university’s South Campus, in front of the rector’s building.

The statement, which was read out loud by two of the alumni, noted that the resistance of university’s students and academics to the appointment of an AKP-linked rector had been continuing for nearly 100 days and that Bulu should pay attention to this “strong defiance” and resign immediately.

“We request the immediate resignation of Melih Bulu in order to pave the way for a participatory and democratic election, so that this university institution can function in the best manner for the benefit of the public,” the alumni said, underlining that the protests at the university are supported by a majority of the public.

A recent survey conducted by KONDA, one of Turkey’s leading polling companies, revealed that 67 percent of participants support the student protests against the appointment of Bulu as rector of Boğaziçi and 62 percent argue that police intervention in the protests is unlawful.

The display of the alumni statement took place following the 68th vigil of university academics who had been gathering in the same square and demonstrating against the appointment of the loyalist rector by turning their backs on the rector’s building on weekdays every week since the swearing-in of Bulu on Jan. 5.

Students and alumni as well as politicians and activists have protested the appointment of Bulu as rector of the university, arguing that it is a part of Erdoğan’s broader effort to centralize control over universities and that it undercuts academic freedoms and democracy.

Since the beginning of 2021, hundreds demanding the resignation of Bulu and the appointment of a rector from the university staff after the holding of an election have been detained for participating in the youth-driven protests that have echoes of the Gezi Park protests that erupted in 2013 against plans to demolish a park in İstanbul’s Taksim neighborhood before spreading nationally and presenting a direct challenge to Erdoğan’s rule.

Bulu, who was a founding member of the ruling AKP’s Sarıyer district branch in İstanbul and worked as deputy chairman of the AKP’s İstanbul provincial chapter, has refused to step down amid protests that entered their fourth month last week.