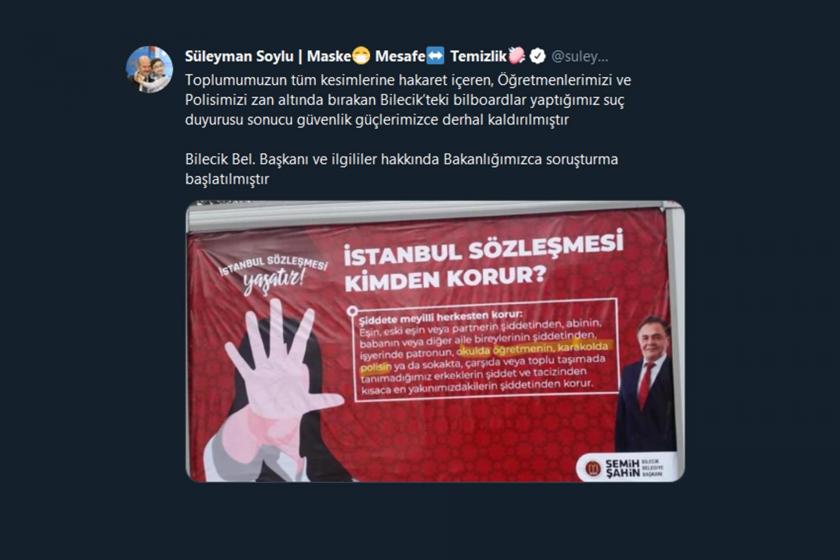 The Turkish Interior Ministry has launched an investigation into Bilecik Mayor Semih Şahin from the main opposition Republican People’s Party (CHP), along with others, for putting up billboards promoting a landmark European treaty protecting women from violence, local media reported on Friday.

The investigation was announced on social media by Interior Minister Süleyman Soylu, who added that the billboards “insulting people from all segments of society and bringing teachers and the police under suspicion” were taken down by security officers after a criminal complaint was filed by the ministry.

“From whom does the Istanbul Convention protect you? Everyone who is prone to violence: your husband, ex-husband, partner, brother, father or other family member, the boss at work, the teacher at school, police in detention centers or on the street, men at the bazaar or on public transport that you don’t even know, in short, those who are the closest to you,” the billboards that led to investigation into Şahin read.

The development came a week after Turkey withdrew from the Convention on Preventing and Combating Violence Against Women and Domestic Violence, better known as the Istanbul Convention, a Council of Europe treaty to prevent and combat violence against women and domestic violence, by way of an overnight decree issued by President Recep Tayyip Erdoğan.

It was the latest victory for conservatives in Erdoğan’s ruling Justice and Development Party (AKP) and their allies, who argued that the convention damages family unity, encourages divorce and that its references to equality were being used by the LGBT community to gain broader acceptance in society.

Signed by 45 countries and the European Union, the 2011 agreement requires governments to adopt legislation prosecuting domestic violence and similar abuse as well as marital rape and female genital mutilation.

Thousands of women protested  in Istanbul and other cities against the government’s decision to pull Turkey out of the treaty, while some lawyers claimed that it was still in force, arguing that the president could not withdraw from it without the approval of parliament, which unanimously ratified the convention in 2012.

Interior Minister Süleyman Soylu on Tuesday made a statement claiming that Turkey was a “sovereign state that can sign and withdraw from any international agreement it pleases.”