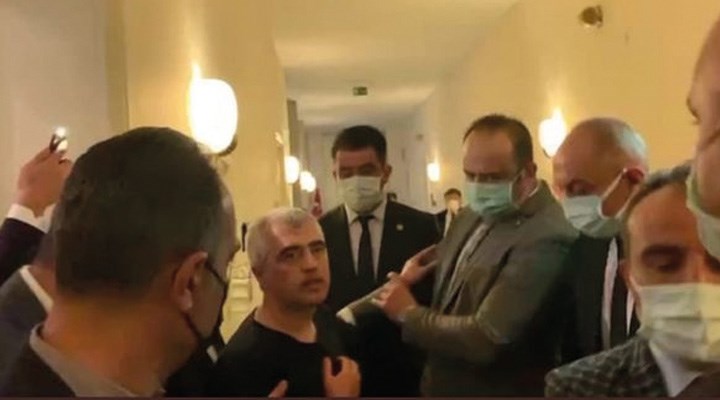 Turkish authorities on Sunday briefly detained a pro-Kurdish opposition MP who had refused to leave parliament for several days after his parliamentary status was revoked, Agence France-Presse reported.

Ömer Faruk Gergerlioğlu “was brought out by force while he was in pajamas and slippers” by “nearly 100 police officers,” the leftist Peoples’ Democratic Party (HDP) said in a statement.

The parliament had on Wednesday revoked the parliamentary status of Gergerlioğlu, an outspoken rights defender, and his accompanying immunity from prosecution after a court upheld a controversial conviction over a social media post.

He has rejected the accusations, and his expulsion from parliament was criticized by numerous campaign groups and Western governments.

He had remained holed up in a room in the parliament since Wednesday.

The HDP tweeted a photo of him being escorted out of the room, wearing a black T-shirt.

“You used to be able to see this kind of scene in the 1990s. Unfortunately nothing has changed,” Gergerlioğlu said during his arrest, according to comments reported by his party.

His remark referred to a decade marked by a flaring of the Kurdish conflict in southeastern Turkey, when several pro-Kurdish MPs were arrested.

A few hours later, the prosecutor’s office in Ankara said he had been released.

In his statement to police, released by the HDP, Gergerlioğlu said he had been roughly handled by the officers who had detained him, leaving him unable to bend one of his fingers and with pain in his neck.

The prosecutor’s office said the detention was justified because Gergerlioğlu had shouted slogans in the parliament in support of the outlawed Kurdistan Workers’ Party (PKK), something the HDP denied.

The HDP, the third largest party in the Turkish parliament, has been under a constant crackdown since 2016 with the arrest of several of its lawmakers and leaders, including its charismatic former co-chair Selahattin Demirtaş.

Demirtaş — a two-time rival to incumbent Recep Tayyip Erdoğan in presidential elections — has been kept in detention since 2016 despite calls from European Court of Human Rights demanding his release.

The top public prosecutor in Ankara had on Wednesday demanded that the HDP be dissolved over its alleged links to PKK.

The PKK has been waging an insurgency since 1984 that has killed tens of thousands and is listed as a terrorist organization by Turkey, the US and the EU.

The HDP has seen dozens of its mayors dismissed over alleged terror links.

Western powers have universally condemned the bid to shut down the HDP. The country’s highest court is due to rule on the case in the coming weeks.