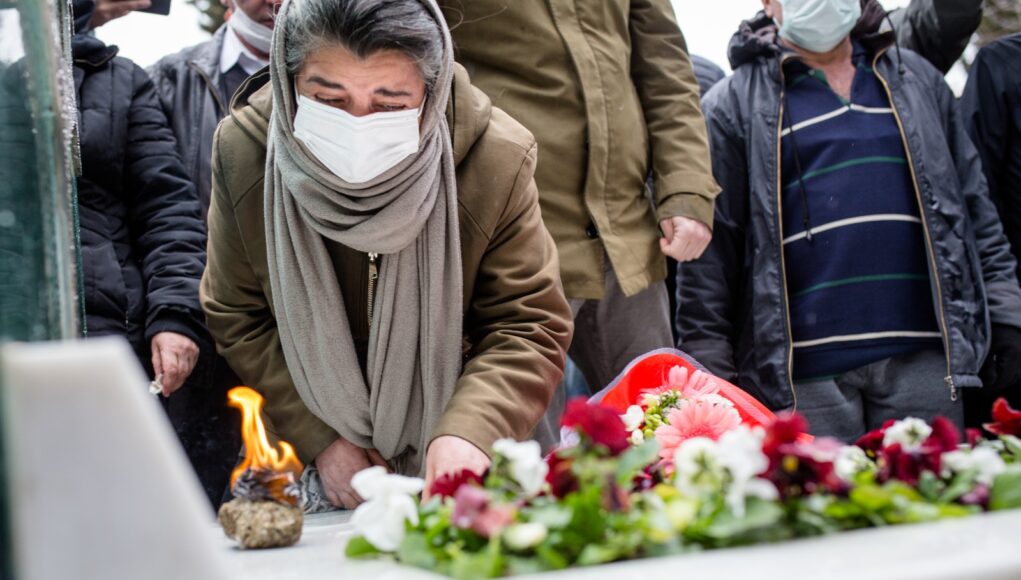 The mother of Berkin Elvan, a teen who was struck in the head with a gas canister fired by a police officer during the anti-government Gezi Park protests in İstanbul in 2013 and subsequently succumbed to his injuries, has said her family has seen not a single ray of justice over the past seven years since her son’s death.

Elvan died on March 11, 2014 after remaining in a coma for 269 days. He was 14 when the police officer shot him in the head with a tear gas canister and 15 when he passed away.

Elvan was commemorated at his grave in the Şişli Feriköy Cemetery on Thursday. Elvan’s family and several opposition deputies and human rights activists were allowed in the cemetery under high security.

Elvan’s mother Gülsüm, who wept at her son’s grave, told reporters that her family had been fighting for justice for seven years but has seen no hope that justice will be served in her son’s case.

“We are chasing after a justice that doesn’t exist,” said Gülsüm Elvan.

Gülsüm Elvan, who held then-prime minister and current President Recep Tayyip Erdoğan responsible for Berkin’s death because he ordered the police to use excessive force to suppress the protests, was attacked by Erdoğan at a public rally in 2014. Erdoğan branded Berkin a terrorist and let the crowd to boo the woman.

“This kid with steel marbles in his pockets, with a slingshot in his hand, his face covered with a scarf, who had been recruited by terrorist organizations, was unfortunately subjected to pepper gas,” Erdoğan said during a televised speech in March 2014.

Addressing Erdoğan, Gülsüm Elvan said she leaves him to his conscience and asks him to think how he could have branded a 14-year-old child a terrorist.

“A 14-year-old child… If you have a conscience, I leave you alone with it. You have made me go through this pain for seven years. Today, you are once again trying to attack us. Enough is enough.”

“The damage that you have inflicted on this country is everywhere. Are we supposed to forget about Roboskî, Ankara, Suruç and the 3-month-old baby in Sur? I assure you that all these incidents and all these mothers will settle accounts with you. I will not stop until I make you appear before a judge and stand trial. I say justice, justice…” said the mother, referring to tragic events that have taken place under Erdoğan’s rule.

The family’s lawyer Can Atalay said none of the murder suspects except for one has stood trial despite the seven years that have elapsed since the incident and that every effort is being made to ensure that that suspect does not receive any punishment at all.

Berkin’s father Sami said those who ordered the murder of his son are living in luxury, drinking their white tea, referring to Erdoğan, who is known to drink an expensive of kind of tea.

In January a Turkish prosecutor demanded a lesser sentence for the police officer who caused the death of Berkin Elvan. The prosecutor, newly appointed under the influence of Erdoğan, announced his final opinion on the killing of Elvan at the 18th hearing in İstanbul.

Revising the indictment after he was appointed in December, the prosecutor demanded that police officer Fatih Dalgalı, the sole suspect in the case, be convicted of “negligent manslaughter.”

The previous prosecutor’s original indictment had accused the police officer of “killing with oblique intent.”

The mass protests that rocked the country in 2013 started over plans to demolish Gezi Park, one of the rare green spaces in central İstanbul.

The anger quickly spiraled into broader protests against Erdoğan over his authoritarian policies, such as controlling the media and the judiciary.