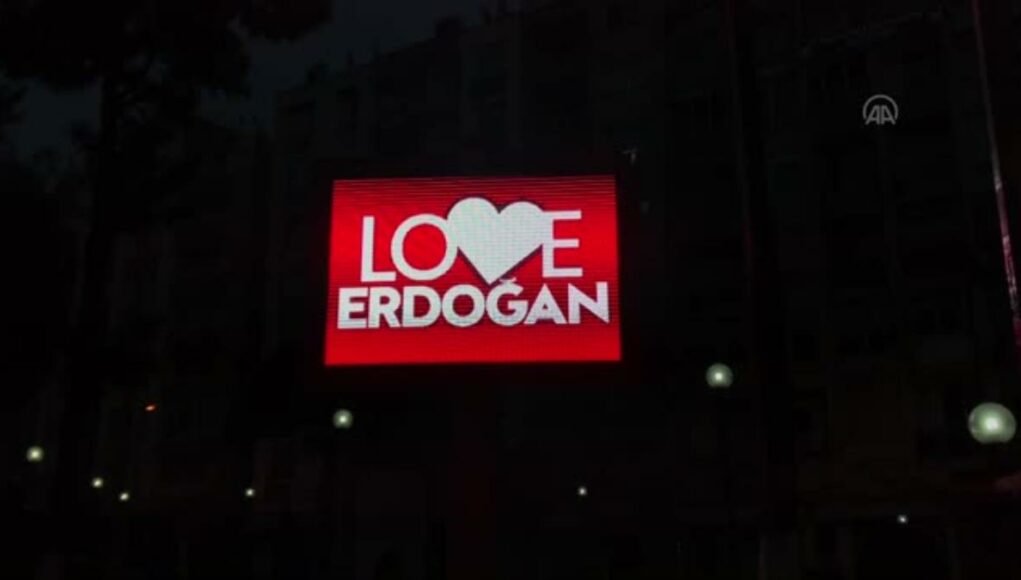 The sign in Times Square was paid for by the US-based nonprofit Advocates of Silenced Turkey.

STOP ERDOGAN: Raise your voice for the grave human rights violations in Turkey. This is the heart of New York City. #Fight4WomenTurkey pic.twitter.com/zZDV1EeEON

AKP spokesperson Ömer Çelik branded the sign as the work of the Gülen movement, a faith-based group outlawed by Ankara.

Following a coup attempt on July 15, 2016, the Turkish government and President Erdoğan pinned the blame on the Gülen movement, describing it as a terrorist organization.

“FETÖ [a derogatory acronym referring to the Gülen group as a terrorist organization] is an enemy of Turkey and hence our president. This treacherous network added to their betrayals by targeting our president with ads filled with lies. Their attacks on our president stem from their enmity towards our people,” Çelik tweeted.

This is creepily Orwellian:
"It is not enough to obey him. You must love [Erdogan]."

I don't think Recep understands that 1984 wasn't meant to be aspirational. #BigBrotherIsWatchingYou

Turks denounced the campaign, tweeting that the ads looked “Orwellian,” while some alluded to Stalin’s personality cult.

If Stalin was alive, I am sure he would have liked these Ak Party mayors in the race to equip their cities with Love Erdogan billboards. pic.twitter.com/QJgPpNWAoY

Signs in Kurdish that read “We love Erdoğan” appeared in Kurdish-majority cities, sparking backlash from Kurds who also took to Twitter to denounce the move.

#Turkish colonialism at it best: A giant Turkish flag and a banner with “We love Erdogan” in Kurdish are hanging over the historic citadel in Amed.

In #Bakur signs and street names in the Kurdish language are being removed by the Turkish state!#TwitterKurds https://t.co/7msHRTKycv

The Erdoğan administration replaced 59 out of 65 elected mayors from the pro-Kurdish Peoples’ Democratic Party (HDP) with government appointees after the 2019 local elections.

Erdoğan, whose AKP has been in power as a single party government since 2002, was elected president in 2014 and reelected in 2018. His election in 2018 was under a presidential system as Turkey switched from a parliamentary to a presidential system of governance with a public referendum in 2017. Under the presidential system, Erdoğan is accused of establishing one-man rule, destroying the separation of powers and silencing dissent.

The AKP government launched a massive crackdown on non-loyalist citizens following the failed 2016 coup as thousands of people were jailed on trumped-up terrorism or coup charges.