An estimated 70,000 people live with Down syndrome in Turkey, and many of them and their families feel marginalized in their everyday lives. Societal prejudice forces these people to stay at home or in institutions, leaving them without the opportunity to participate in society.

Unfortunately, people with Down syndrome are exposed to discrimination in Turkey, although developed countries place great importance on improving the self-advocacy skills of these people and developing social support mechanisms for their families.

Journalist Burak Acerakis, the “father of a miraculous 47 chromosome [boy]” is a well-known figure in Turkey who is fighting the social bias against people with Down syndrome. Acerakis is the author of “Aris’in Yolculuğu” (Aris’s Journey) the first “science fiction” where the main character Aris is a superhero child with Down syndrome.

The book, designed for children but also useful for adults, aims to spread awareness. Written in Turkish, the book is in the process of being translated into English, German and other languages. Acerakis continue to work and advocate for and support people with Down syndrome by providing information, resources and assistance for parents and society by means of his Twitter accounts.

Acerakis was always a big fan of science fiction, but in the beginning he hadn’t really considered writing a book. He took small notes and thought they could become a collection of short stories for 6-year-old Aris that he could read in the future.

“After Aris had a successful open heart surgery, we went to the Austrian Alps for a winter vacation. Everything was good, Aris was healthy, but my wife and I were exhausted because of the stress we had experienced during the surgery.

“Aris was standing in the snow on a mountain peak, and then I saw the north star above him – that scene seemed like a page from a sci-fi novel and the hero was my son. I decided to write a book about his adventures and struggles in his unique world which I called Dadu,” Acerakis told Turkish Minute in a phone interview. 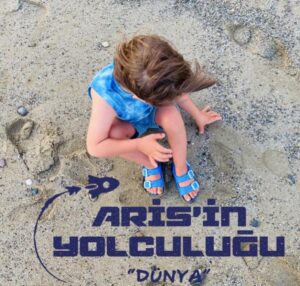 According to the book, Dadu is the most beautiful and greenest planet in the galaxy where “46 and 47 chromosomes” live happily together in peace. In Dadu, the injustices and preconceptions that we see every day on earth don’t exist.

The greatest desire of our hero, Aris, is to see the earth. He wants to go and explore this interesting planet, but it’s very difficult and dangerous for him because the earth is not safe and clean like Dadu, where Aris is used to living. Therefore, his father frequently warns him, saying: “People on earth are selfish, Aris. They don’t know how to share things. You can’t be happy on a planet like that,” but Aris refuses to give up and follows his dream full of hope and determination.

“There’s no science fiction book anywhere whose protagonist has Down syndrome, a fact that greatly upset me. The books and stories are monopolized by ‘normal people’ with 46 chromosomes. This is also a confirmation of our prejudice and ignorance – others with special needs are never heroes in our world. I tried to change that with this book,” said Acerakis.

Ayşe Öztan, a dentist who works for a well-known hospital in Istanbul, told Turkish Minute that being the parent of a child with Down syndrome is one of the biggest challenges in Turkey. “You are all alone when your child is born with Down syndrome. I was ‘lucky’ that my husband didn’t leave me for giving birth to ‘this kind of child’ like some other fathers do in Turkey. He loves our child, and we fight together against society’s prejudgment of our family. The state does not support families like ours; however, moral and material support is the most important thing in the first years,” Ayşe said.

Ayşe thinks the state should adopt different policies and that the main one should be to educate all people, not only families who have members with various syndromes but everyone. “My father told me that he would prefer his grandchild had died during birth rather than ‘being like this.’

“After hearing this, I cried for days because I love my child more than anything,” Ayşe said and added that on her journey she also learned to forgive friends and relatives because they were not hard-hearted, just uneducated, and that it wasn’t their fault.

“My son is 16 years old now. I’m used to being ‘his mother.’ At first, when people would see him they were always afraid, but if they tried and engaged with him, they understood that he was just a child. Now he’s a teenager, and sometimes he’s the one who takes the first step to make contact. My son and others like him are not stupid, they’re just different. These children and people with Down syndrome belong to our society, and they shouldn’t be marginalized.” said Ayşe.

To overcome the social bias against people with Down syndrome in Turkey, NGOs and state institutions are working on various projects. Although awareness of Down syndrome has increased due to campaigns in recent years, the biggest problem has remained the same for the families – they need more government support to access free therapy and special education.

The Down Syndrome Association is the best known nonprofit organization in Turkey committed to supporting people with Down syndrome by increasing awareness and fighting discrimination in society. Their goal is to enhance the lives of people with Down syndrome by providing the knowledge necessary to live a full life. They provide information on education, health and social care and build a communication network among families and caregivers.

Acerakis and his family live in Germany now, and he thinks everything would be more difficult if they still lived in Turkey. “People with Down syndrome are still not recognized in social life, and they and their families face ignorance every day. It is very difficult to access the speech and language therapies that are vital for these children. My son has had success with experienced therapists and good care centers. The state covers the expenses, and we pay barely a penny.”

However, Acerakis thinks the situation is hopeful in Turkey. “People are becoming more reasonable now, and when they see somebody with Down syndrome on the street, they don’t look like they’ve seen a UFO. NGO projects and information on social media have helped us to change people’s perspective,” said Acerakis.

It is impossible not to think and worry about the future of your child with Down syndrome when you don’t receive any assistance from the government. Ayşe carries this heavy burden together with her husband and has “no guarantee for the future” like other parents. “Maybe the worst thing for a mother is to witness the death of her child, but for parents like us, the worst is to die before your child. You don’t know who will take care of your child. This feeling is very hard to bear. Therefore, we as parents have a request of the state: They should take care of these children,” she said.

Ayşe thinks raising awareness is the most important thing for people in Turkey with Down syndrome and that Acerakis made a big impact with his book, adding: “We live in Istanbul, there are good hospitals in our city, and my husband and I have high salaries, but not everybody is as lucky as us. People who live in villages or other cities have difficulty accessing rehabilitation centers and securing state support. Acerakis’s book breaks the taboos. I bought 20 copies this year to give as gifts to my friends for various occasions. We need more books, movies and stories about our children.”