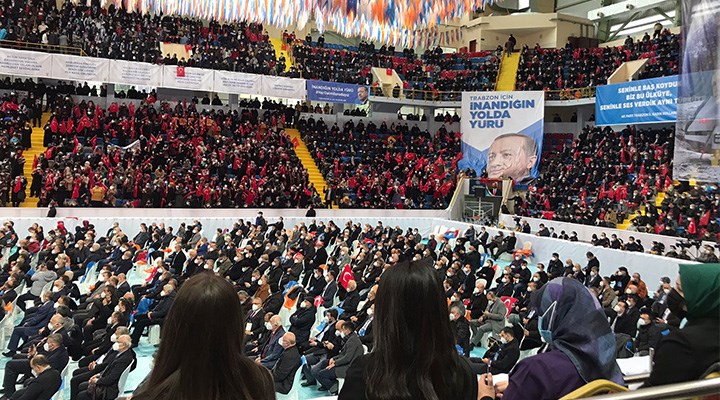 The latest data released by Turkish Health Minister Fahrettin Koca show that the number of coronavirus cases in Turkey has increased significantly within the last week, especially in provinces where the ruling Justice and Development Party (AKP) held indoor rallies in defiance of Koca’s warning to avoid indoor gatherings.

Koca on Monday released weekly infection rates on social media for Turkey’s provinces, with the Black Sea province of Ordu taking the lead with 228.40 cases per 100,000 people. Ordu is followed by neighboring Giresun, where the AKP held a meeting on Feb. 8, with 217.57 cases –- a weekly increase from 184.34 -– and Trabzon with 207.54 cases.

Turkish President Recep Tayyip Erdoğan drew criticism last week when he bragged about how packed the crowd was while giving a speech at an AKP meeting held in Rize.

“We are having a convention in the middle of the pandemic, and the auditorium is jam-packed,” he said, drawing ire from Turkish social media users.

The users criticized him for his double standards as restrictions do not allow businesses to remain open or people to hold funeral or wedding ceremonies in groups of over 30 people. while the AKP is able to hold crowded political rallies.

The AKP’s İzmir provincial office invited high school students and required the schools’ staff to attend the party’s convention on Monday, the Birgün daily said in a report on Tuesday.

Following Erdoğan’s announcement last week that an easing of restrictions would start in Turkey in March, Koca on Saturday said the country would start to gradually normalize from coronavirus restrictions as of March 1.

Turkey’s provinces will be categorized as low, medium, high or very high risk based on infection rates, Koca said, with a new color-coding system entering into use at the beginning of March.

Turkey reported the first coronavirus case on March 11, relatively later than other countries in Europe. From July to the end of November, the Turkish government made public only the comparatively small number of COVID-19 “patients” with symptoms, excluding people with no symptoms and who didn’t require hospitalization. In the wake of growing criticism, the Health Ministry in late November began to report the number of all individuals who tested positive for the coronavirus.

Turkey’s medical community and opposition parties accuse the Turkish government of manipulating the number of coronavirus cases and deaths in the country in order to mask the true scale of the pandemic and present a “success story” to the public.

As of Feb. 23, Turkey had confirmed more than 2.64 million COVID-19 cases, 28,138 fatalities and over 2.52 million recoveries. The country began a COVID-19 vaccination campaign on Jan. 14, starting with health care workers along with top officials to encourage public confidence in the vaccine.