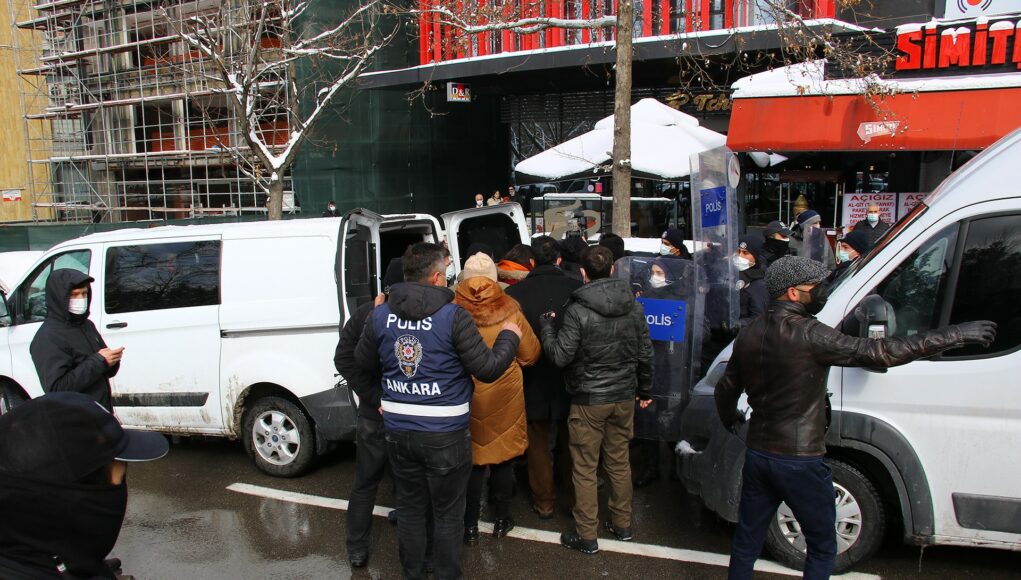 A group of women was detained on Tuesday in Ankara after they attempted to stage a demonstration against President Recep Tayyip Erdoğan’s initiative for an all-female university, the Stockholm Center for Freedom reported citing Turkish media.

Several female activists gathered in a park in central Ankara and chanted the slogan, “We do not want a women’s university.” They wanted to make a statement, but the police intervened in the gathering, ripped up their banners and detained the eight women.

During a visit to Japan in 2019, Erdoğan said he admired the women universities in the country and was planning to establish such institutions in Turkey. In a speech made at Mukogawa Women’s University, from which he received an honorary doctorate, Erdoğan had said he requested that Turkey’s ambassador to Japan see if the model could be implemented in Turkey.

A month later, at a university graduation ceremony in Turkey, Erdoğan reiterated his desire for a women’s university. “I want to remind the president of the Council of Higher Education [YÖK] that I asked them investigate whether such a university could be established in Turkey. It’s not a big deal, we used to have gender-segregated high schools which were later abolished and genders were mixed, which is strange. Turkey needs to take the necessary steps for a gender-segregated university,” he said.

At the end of 2020 the Official Gazette published the 2021 Presidential Annual Program, where it stated that a women’s university would be officially established.

Critics have slammed the decision, saying a segregated university would further deepen the gender divide in Turkey.

According to the Social Solidarity Network (SODA), there is already much gender discrimination in Turkey and society has a very stereotypical idea of gender roles. In this context, a women’s university will only reinforce the idea that there are jobs suitable for women and jobs suitable for men.

“When you look at the number of women in politics in Japan, their numbers are even lower than Turkey,” SODA said in a statement. “This means that women in Japan have even less say about policies that concern them.”

SODA also said that segregating men and women would pave the wave for unhealthy relationships, and would create the image that the two genders could not work or study together.

Several university women platforms came together in January and established the social media group “We don’t want Women’s Universities.” In a statement the collective said such gender-segregated institutions would further isolate women in society. They added these institutions were outdated and supported traditional gender roles.

“If the idea is to protect women from certain dangers on campus, then the government should enforce the Istanbul Convention and prosecute crimes against women accordingly instead of removing women from society,” said a women’s group on social media.

The İstanbul Convention is a Council of Europe treaty designed to prevent violence and domestic abuse against women. Some government officials and conservative newspapers have been discussing a possible withdrawal from the convention in the past year, claiming that the İstanbul Convention has destroyed families by introducing “foreign terminology” to traditional Turkish values and the law.

According to conservative politicians, the first of them is gender, which they envision as a fight against the roles of men and women because it holds that the identities and biological sexes of men and women are constructed by society.

President Erdoğan has repeatedly said he sees gender equality as contradictory to the nature of men and women.