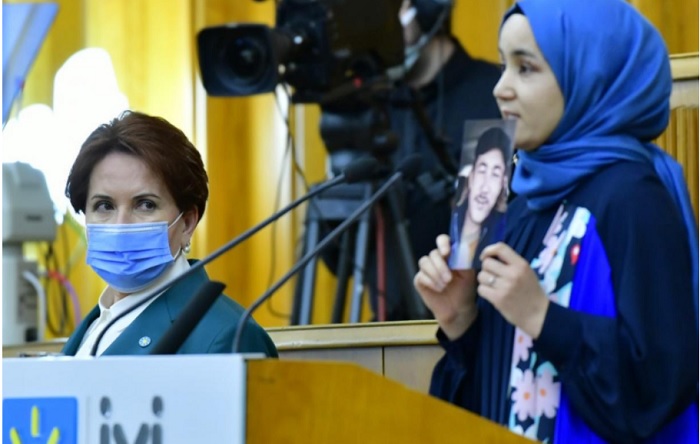 Turkish TV stations on Wednesday cut off their broadcast of an opposition party meeting in the Turkish Parliament after the party’s leader allowed a Uighur woman to speak about the persecution of the Uighur Turks under the Chinese government.

During her party’s parliamentary group meeting, İYİ (Good) Party leader Meral Akşener criticized Turkey’s ruling Justice and Development Party (AKP) and its opposition ally, the far-right Nationalist Movement Party (MHP), for remaining silent about the sufferings of the Uighur Turks in Xinjiang at the hands of China. She said the Turkish government remains a silent spectator of the Chinese aggression towards the Uighurs, while the EU and the US raise their voices against it.

Akşener then allowed a Uighur woman named Nursiman Abduraşid to speak about the tragedies suffered by the Uighur Turks in Xinjiang, which led Turkish TV stations that were broadcasting the meeting live to cut off their broadcasts. The state-run Anadolu news agency and Turkish Parliament TV continued their broadcasts after the Uighur woman finished her speech.

Abduraşid said she has been unable to reach her family in in Xinjiang since June 2017 and had just learned that they were taken to internment camps and then arrested. Abduraşid asked Turkey and the world to take action to end the suffering of the Uighurs.

China’s persecution of the Uighur minority in Xinjiang has escalated in recent years, amounting to what experts have said is cultural genocide. More than 1 million people are thought to have been detained in internment camps, and there is growing evidence of re-education programs, restrictions on religious and cultural beliefs, enforced labor schemes, mass surveillance and forced sterilization of women.

China initially denied the camps existed but now describes them as vocational schools aimed at dampening the allure of Islamist extremism and violence.

Many Uighurs have fled to Turkey to escape persecution. However, Ankara is accused of having grown closer to Beijing in recent years and increasing its assistance in apprehending or interrogating Uighurs who Chinese authorities have accused of terrorism. While it refuses to return Uighurs to China directly, Turkey has been accused of sending them to a third country, like Tajikistan, where extradition to China is easier.