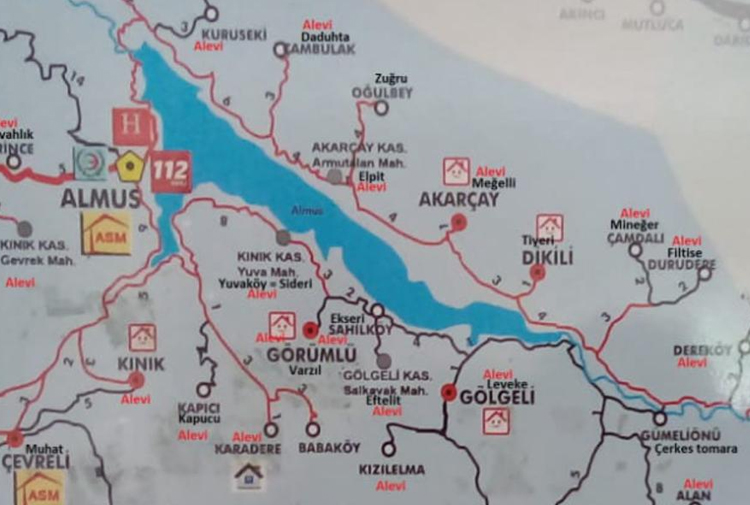 The Turkish Ministry of Health has allegedly been using a map of northern Tokat province on which Alevi villages appear to be clearly marked, a patient’s relative revealed, leading to the fear of official discrimination against Alevi patients, the Stockholm Center for Freedom reported.

According to Anadolu’nun Sesi Tokat (The Voice of Anatolia Tokat), a local news website, the map was revealed when the son of an elderly patient whose name was not disclosed was asked to point to his village on a map sent by the doctor on the WhatsApp messaging application. The man realized that his and several other Alevi villages had been marked as “Alevi” in red letters. Non-Alevi villages did not bear any such notes.

Halil Bakan, president of the Tokat Federation of NGOs (TOKDEF), said this was unacceptable and not a matter to be taken lightly. “Doctors are bound by the Hippocratic Oath,” he said. “He doesn’t have the right to question a patient’s identity, belief or denomination. His job is to treat patients.”

Bakan said such a map was discriminatory and called for a thorough investigation. “[The doctor] should be suspended until the investigation has been completed,” he said, adding that previous treatments and prescriptions by the physician in question  should be investigated.

Speaking to the Pir news agency (PİRHA), the doctor who shared the map said he saw the map in the district community health center and took a photograph of it with his phone. He claimed that he later marked the Alevi villages himself in order be “better acquainted with the villages.”

“I am very sorry. I didn’t think that it would come to this,” the doctor said. “I would like to apologize for the misunderstanding.”

Yet, the doctor also said he was from the region himself, raising suspicions about his real motivation.

Incorporating Shiite, Sufi, Sunni and local traditions, Alevism is a strain of Islam that emerged in the Middle Ages. Alevis are estimated to constitute between a tenth and a fifth of the Turkish population.

Alevi leaders have worried about discrimination and the increasingly precarious situation of their community in Turkey as President Recep Tayyip Erdoğan’s government increasingly imposed its own version of Islam on various segments of society.

During the Republican era, thousands of Alevis were massacred in Dersim in 1937, and hundreds were killed in pogroms in the cities of Çorum, Yozgat and Kahramanmaraş in the 1970s. Thirty-four Alevi intellectuals died in a 1992 fire inside the Madımak Hotel in Sivas. In other incidents, such as in İstanbul’s predominantly Alevi Gazi neighborhood in 1995, Alevis were targeted by people armed with automatic weapons. Many believe the incidents were masterminded by groups inside the state for political purposes.

According to Ali Kenanoğlu, a deputy from the Peoples’ Democratic Party, a left-wing party with majority Kurdish support, 36 publicly known hate crime incidents have targeted Alevis in Turkey within the last eight years.

Alevi places of worship, known as cemevis, are not officially recognized by Turkey and cemevis are occasionally vandalized, with curses and other insulting words put on the walls.