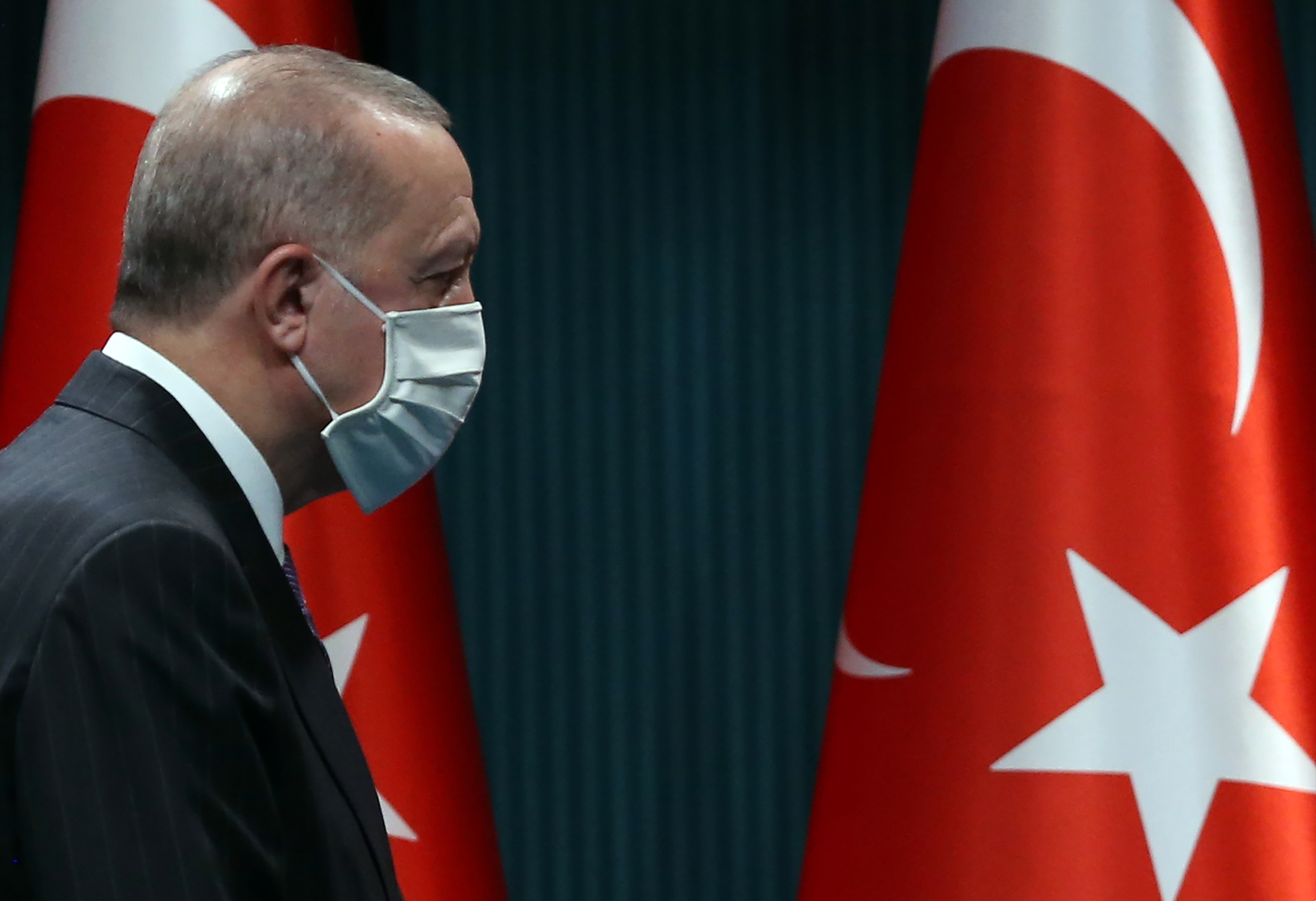 As with the rest of the world, the year 2020 in Turkey was defined by the far-reaching impact of the COVID-19 pandemic. Throughout the year the country has also experienced noteworthy developments, from foreign affairs to the economy, from public life to scandals involving the family of President Recep Tayyip Erdoğan.

Below is an 11-point list that Turkish Minute has compiled to summarize the important events of 2020 in Turkey.

Over the course of the year Turkey became involved in several military conflicts in various regions, and the Turkish Armed Forces (TSK) became an essential element of the country’s external affairs.

The TSK dispatched armed drones and special forces units to Libya to back the Tripoli-based Government of National Accord (GNA) against the eastern forces of General Khalifa Haftar’s self-styled Libyan National Army (GNA), and Turkey’s alleged violation of an international arms embargo on Libya was often a subject of debate. An attempt by French warships to search a Turkish freighter departing from the port of Mersin was thwarted by the aggressive intervention of the Turkish navy. Months later, the German frigate Hamburg carried out a search of another Turkish vessel under suspicion of transporting arms to Libya.

Another allegation was that two-thirds of a $12 billion transfer made to Turkey by the GNA was in return for arms sent by Ankara. In February a Turkish cargo ship was hit by Haftar’s forces in an attack that killed two members of Turkey’s National Intelligence Organization (MİT) who were on board. While the government did not disclose the incident, two Turkish journalists who wrote about it were arrested in an apparent act of retaliation by Erdoğan.

Turkey also became embroiled in disputes with a number of countries over claims to hydrocarbon resources in the eastern Mediterranean, which escalated tensions in particular with Greece and France. Turkey repeatedly issued NAVTEXs to carry out seismic surveys in the disputed areas, and the tensions between Turkey and Greece accelerated to the point where on one occasion warships of the two countries collided. In an attempt to deter Turkey, France dispatched its nuclear aircraft carrier Charles de Gaulle to the region.

In the South Caucasus Turkey actively participated in an armed conflict that broke out between Azerbaijan and Armenia. Three TSK generals and a select group of officers extended tactical support to the Azeri military, while a number of Turkish armed drones were operational in the combat zone.

Turkey’s military involvement in Syria also continued, with the TSK’s observation posts in Syria’s northwestern Idlib province sparking crisis after crisis with Damascus and Moscow. Russia and Syria blocked supply lines to nine out of 12 Turkish observation posts, after which the posts were unable to receive logistical support for a month. The crisis was ultimately defused after Erdoğan made concessions in a summit with his Russian counterpart, Vladimir Putin. Towards the end of 2020, Turkey evacuated seven of the observation posts, leaving them to the Syrian army. The most traumatic incident for Turkey was when 34 of its soldiers were killed in an attack on Feb. 27.

Sanctions by the US and the EU

Turkey’s ties with the United States and the European Union were increasingly strained over the course of the year. Upon diplomatic efforts by France, an EU leaders summit convened to discuss Turkey’s actions in the eastern Mediterranean and agreed on a plan of gradual sanction. European Union High Representative for Foreign Affairs and Security Policy Josep Borrell was tasked with drafting a report detailing possible paths of action for expanding the scope of the sanctions. Borrell’s report will be reviewed at another leaders summit in March 2021. The EU leadership adopted this strategy in order to be able to consult with US President-elect Joe Biden, who will take office on Jan. 20.

In Washington where current President Donald Trump’s term in office is drawing to a close, the Department of State recently announced sanctions on Turkey’s Presidency of Defense Industries (SSB) under the Countering America’s Adversaries Through Sanctions Act (CAATSA) over Turkey’s purchase of a Russian-made S-400 surface-to-air missile system, including a ban on all US export licenses and authorizations to the SSB and an asset freeze and visa restrictions on İsmail Demir, SSB’s president, and other SSB officials.

Reconversion of Hagia Sophia into a mosque

After 86 years, the landmark Hagia Sophia in İstanbul was turned back into a mosque. Originally built as a Christian church, the 1,500-year-old edifice is considered to be the world’s foremost religious monument. After its use as a mosque during the time of the Ottoman Empire, the building was transformed into a museum by the newly proclaimed Republic of Turkey.

Following an intense campaign by Erdoğan, the Council of State (Danıştay) cancelled a 1934 cabinet decision that ordered its conversion into a museum, which paved the way for Hagia Sophia’s inauguration as a mosque once again.

The move was widely perceived as another stage in the “neo-Ottomanism” debate that has been going on in the country since the early 2010s, and it raised eyebrows in the West as well. Hagia Sophia is also inscribed on UNESCO’s World Heritage List.

Erdoğan’s challenge within his own family: resignation of his son-in-law

On Sunday, Nov. 8, Erdoğan’s son-in-law Berat Albayrak stepped down as minister of finance and treasury. Albayrak was seen as the heir to Erdoğan’s throne, and his move was interpreted to be a major act of defiance.

Albayrak quit in an unusual manner. Earlier in the day, his personal Twitter account as well as the ministry’s official one were locked, and all the tweets posted on the two accounts were deleted. Nearly two hours later, Albayrak’s personal Instagram account released a resignation letter containing tacit criticism of Erdoğan. Throughout Sunday and Monday, pro-Erdoğan television channels and newspapers kept silent about the resignation, with the debate limited to social media. On Nov. 9 the Presidential Communications Directorate confirmed the development, citing “health reasons.”

Following his resignation, Albayrak went off the grid. No news has emerged of him, and rumors circulating on social media have speculated that Erdoğan is holding him under house arrest.

Turkey’s economic outlook became increasingly unfavorable during the course of the year as growing cheap bread lines epitomized the impoverishment of the population. The plummeting of the lira, which went from 5.94 to the US dollar at the beginning of the year to around 7.5 in December, with a record low of 8.5 on Nov. 7, often occupied the economy-related news flow. In the best case scenario, the lira is expected to close the year with a loss of 25 percent.

Amid the constant economic turbulence, first lady Emine Erdoğan’s $50,000 Hermès handbag was often in the spotlight. While a pro-government journalist claimed that the handbag was an imitation and not originally made by the French luxury brand, it failed to put an end to the debate on social media.

Conviction of journalists, curtailing of freedom of expression

2020 was another hard year for Turkey’s journalists, many of whom faced arrest and conviction. Journalists Mehmet Baransu and Can Dündar, whose publications had drawn Erdoğan’s wrath, were handed down lengthy prison sentences. Baransu, who is currently incarcerated in Silivri Prison, was handed down a combined sentence of 36 years in prison, 17 from one trial and 19 from another, while Dündar, who lives in exile in Germany, received a sentence of 27 years. Another imprisoned journalist, Mustafa Ünal, was sentenced to more than 10 years. Many others received sentences ranging from six to 25 years, mostly on terrorism-related charges.

A major development concerning freedom of expression was a new law on social media that requires platforms with over a million users in Turkey to comply with a series of provisions that imply heavy censorship and the sharing of user data. The legislation concerns all major platforms such as Facebook, YouTube, Twitter and Instagram and went into effect at the beginning of October, resulting in fines on those platforms that refused to comply.

In addition, a new bill brought to parliament is planned to grant Erdoğan the power to directly seize personal assets and the Interior Ministry to shut down associations without court orders.

The court’s Grand Chamber on Dec. 22 released a new judgment which found that Demirtaş’s detention was in violation of five articles of the European Convention on Human Rights, calling for his immediate release. As of the time of writing the ruling has not been implemented.

The defiance of upper courts has become a commonplace occurrence in Turkey, where an İstanbul high criminal court defied a Constitutional Court order in October which said that opposition deputy Enis Berberoğlu’s rights had been violated.

Torture and ill-treatment, which became systematic after a failed military coup in 2016, characterized the year 2020, too. In September two villagers in the predominantly Kurdish eastern province of Van were found unconscious from torture and hospitalized, just a few hours after being taken into custody. Of the villagers Servet Turgut, 55, succumbed to his injuries, while Osman Şiban, 50, was treated in a hospital for an extended period of time. Şiban explained what happened to him after his discharge from the hospital, describing details of torture at the hands of a group of soldiers.

Dozens of women who were detained and arrested on political grounds alleged that they were subjected to undue strip-searches by prison guards. The women released video messages on social media describing the use of the practice as a method of torture. A total of 176 people who resisted were reportedly subjected to further abuse.

Restrictions and controversies amid COVID-19

As COVID-19 spread across Turkey in the spring of 2020, it brought with it doubts about the accuracy of the official daily statistics released by the Ministry of Health. The Turkish Medical Association (TTB) published reports based on lab data alleging that the true extent of the outbreak was 20 times the official announcements. After initial resistance, the ministry eventually changed policy and significantly increased its daily numbers. It was also alleged that the death certificates of hundreds of people contained the general term “contagious disease” as the cause of death, instead of specifically referring to COVID-19.

To curb the spread of the disease, the government repeatedly imposed nationwide curfews. In April the government passed early release legislation to ease overcrowding in prisons, which explicitly excluded political prisoners.

On Oct. 30 another earthquake hit the Aegean, centered northeast of the Greek island of Samos, 23 kilometers off the coast of the western Turkish province of İzmir. The disaster, with a death toll of 119 and 1,053 people injured in the two countries, was recorded as the deadliest earthquake of 2020 in the world.

Two avalanches hit the eastern province of Van in February, killing 41 people between them.

After an attack in northwest Syria killed 34 Turkish soldiers in February and prompted an escalation of anti-migrant sentiment in Turkey against the country’s Syrian refugee community, Erdoğan announced that his government would green light Syrian refugees crossing into Europe, which led thousands to head to the border with Greece. Some migrants were transported from İstanbul to the border in state-owned buses. Greek security forces blocked the migrants with tear gas. Turkey claimed that 100,577 had successfully crossed the border, while Greece said the number stood at only a few hundred.

Turkey’s announcement also caused an increase in the number of migrants coming into Turkey from Afghanistan and Syria. In June a boat carrying over a hundred migrants sank in Lake Van near the Iranian border, killing everyone on board.