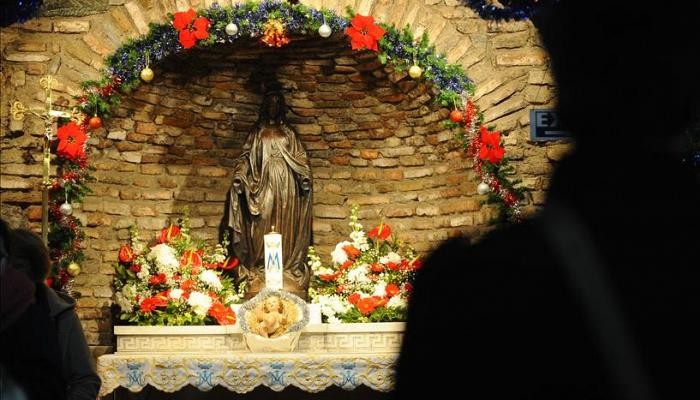 Christmas, one of the biggest holidays of the year for Christians, may be the perfect time to discover Turkey’s Christian minorities, their traditions and their problems.

Religious and conservative Turks do not celebrate New Year’s, but secular ones do. On New Year’s Eve, modern Turkish families enjoy dinner at home with friends or entertainment at a restaurant or club. They also adorn their homes for the new year with Christmas decorations.

While some Turks buy a Christmas tree to “welcome the new year,” some find it unacceptable because according to them to “it is forbidden to join in the celebrations of other religions.” In recent years this pressure has grown around mid-December, when Muslim opinion leaders and writers reiterate that “a 99 percent Muslim country does not celebrate Christmas” in their columns and on TV shows. In response to these warnings people who enjoy the New Year’s spirit and exchange of gifts say, “We are not celebrating Christmas, just welcoming the new year with a few decorations and friends.”

However, at Christmastime, the dwindling Christian communities in Turkey still struggle to celebrate one of the most important days of their religious calendar. Especially in Istanbul neighborhoods where Christian minorities can still be found such as Tatavla (Kurtuluş), Bakırköy, Yeşilköy and Kadıköy, you can witness the holiday celebrations of Armenians, Greeks and Assyrians complete with festive trees.

Today, the biggest Christian holidays — Christmas and Easter — are nonexistent in Turkey, a country that has great significance in the history of Christianity, apart from small-scale religious rituals in churches and family celebrations.

The 1923 Treaty of Lausanne designated Armenians, Greeks and Jews as ethnic minorities in Turkey. This legal status was not granted to Muslim minorities such as the Kurds, who constituted the largest minority in the country by a large margin. Data on the ethnic diversity of the country is not officially collected, although various estimates exist. All Muslim citizens are regarded as Turks by law, regardless of their ethnicity or language, while there is another classification for Armenians, Greeks and Jews: non-Muslim Turks.

Today, only around 150,000-180,000 Christians live in Turkey, the largest number of whom are believed to be 50,000-60,000 Armenian Apostolic. According to state data, as of 2006 the Christian Greek population numbered some 2,500. The Armenian genocide, the massacres of Syriacs, Assyrians, Greeks and Chaldeans in the late Ottoman period and several anti-Christian policies targeting non-Muslims in the modern Turkish Republic resulted in the emigration of Christians to foreign countries and had a significant impact on the country’s demographic structure.

Armenians celebrate New Year’s on January 1 and Christmas on January 6 instead of the 25th of December. That’s why there is a change in word order when greeting people for the holidays: “Happy New Year and Merry Christmas.”

Turkish Minute spoke with Levon Bağış, an Istanbul-Armenian writer and wine expert who thinks the visibility of Armenians has increased in recent years with the help of social media. “Our generation lived in an introverted Armenian society but has become more socialized than our parents. Therefore, I believe that celebrations have become more visible when compared to the past,” he said.

December is the “month of grumble” for Christmas and New Year’s in Turkey. Pro-government press and social media are often flooded with complaints that these non-national and non-domestic celebrations have a “bad influence” on the country’s culture.

The Turkish Directorate of Religious Affairs has repeatedly said in past years that “celebrating New Year’s Eve alienates Muslims from their culture.” Moreover, every year young Muslims stage demonstrations before Christmas holding banners proclaiming “A Muslim does not celebrate Christmas” or “Be a Muslim and celebrate only Muslim feasts.” You can see similar posts on social media.

In recent years, Santa Claus puppets or people dressed in costumes have been attacked by protesters. In 2013, during a demonstration in Istanbul’s Beyazit Square that raised a further alarm for “New Year’s celebrations,” protesters performed a “circumcision” on an inflatable Santa Claus and then stabbed the doll, while shouting “This is a Muslim country!”

The new generation of Istanbul Armenians, compared to the previous generation, is more confident about its Armenian identity, which results in a healthier and more open communication within Turkish society, and as a result feel justified in more freely celebrating Armenian holidays.

Today, social media provides a foundation for Armenians to show their cultural similarities with Turks and raise their problems in the country. Social media has become an alternative channel between people from different ethnic roots to discuss disagreements and understand each other in Turkey, where assimilation-based state policy still rules.

According to Bağış, the new generation of the Armenian community celebrates but gives less importance to religious holidays and traditions for different reasons. “I think, besides generation, it also depends on your family’s approach. I attach importance to these celebrations because for me, they are not only religious but also cultural events. That’s why I’m trying to keep them alive. I have peers who don’t care about these kinds of things, but I do. I am not sure what will happen in 10 or 20 years in Turkey, but I hope my child will continue to do the same and preserve our culture and family traditions,” said Bağış.

The vast majority of Turkey’s Armenians are now concentrated in Istanbul; however, different Armenian cultural traditions from Sason, Malatya, Diyarbakır and Yozgat still exist in multiple sub-communities in Turkey. Now all Armenians, distant from their hometowns in eastern Turkey, try to keep their family customs alive in Istanbul.

Turkish Minute spoke with Silva Özyerli, a Diyarbakır-born Armenian writer who specializes in Armenian cuisine. “If we compare today’s situation with 30 or 40 years ago, of course, there are differences. We are not celebrating Christmas or Easter with great excitement like in the past. But it is not only about us Armenians. The world is moving away from religion. It is a fact that holidays are no longer as important as they once were. We can consider it normal, but we know our religion is the only way to preserve our culture in Turkey,” Özyerli said.

Armenia was the first country to adopt Christianity as a state religion, in A.D. 301. Since ancient times the “Christmas table” has been the most important part of the celebration. On the evening of Jan. 5 people light candles in the churches and bring them to their homes. According to the belief this “Christmas divine fire/light” is the blessing of the church and symbolizes the light of the Star of Bethlehem. Armenians believe this light will bring success and health.

To celebrate Christmas Armenian usually cook fish and drink red wine or an anise-flavored alcoholic drink, raki in eastern Armenian communities like those in Syria, Lebanon and Turkey. On the other hand, anoushabour, a pudding made from wheat, berries and apricots that symbolizes the plentifulness of the family, is the primary desert for New Year’s and Christmas.

Özyerli thinks Armenians from the eastern cities of Turkey such as Diyarbakır and Malatya forgot their local Armenian traditions and tried the learn and practice İstanbul-Armenians’ traditions. “I came from Diyarbakır to Istanbul at the beginning of the 1980s and started to make what Istanbul-Armenians make for celebrations: topik [an appetizer prepared with chickpeas, onions, tahini and spices] for the new year, and midye-dolma [stuffed mussels] for Easter, but I suddenly realized I had started to forget the recipe for Diyarbakır paska bread. Now I’m trying to keep alive both traditions and special foods in Istanbul.

According to Özyerli cultural estrangement in the Armenian community has different aspects and is a multi-layered problem. “There is a gap between the Armenian people and the church. The politicization of the clergy and problems created during the postponed Istanbul Patriarchate election have had disappointing results. Now Armenians question the church’s functions. Thirty years ago the church was an institution that preserved the dentity and united us in Anatolia. It no longer is…”

We should note that despite considering Turkey their home and ancestral motherland, today many Armenians are considering opportunities to emigrate from Turkey because of the growing hate speech towards them and the unstable economic and political situation. Armenians also have a fear of losing their identity and religion at a time when nationalism and Islam are the main rising trends in Turkey.

Özyerli is desperate regarding state policies towards minorities and no longer expects support. “Turkey does nothing to preserve the culture and language of others. We are all alone. We are trying to preserve our cultural heritage, but it is really difficult. Armenian schools make an effort, but at the end of the day they work under the control of the ministry of education and are not independent in their activities,” said Özyerli.

“There is a question of existence, not just culture. Schools and churches, which are the only tools for our struggle against assimilation, have long been seen as means of revenue for some community members. I think we are a society that is poorly managed by our organizations. Especially after the 1950s, some of us accepted voluntary assimilation because of state pressure. It is difficult to predict the future of the Armenian community in Turkey,” said Bağış.