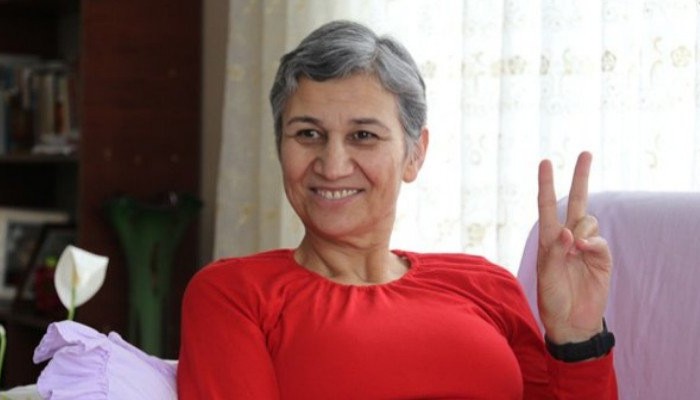 Leyla Güven, a Kurdish politician who was ousted from the Turkish Parliament in June and handed down a sentence of 22 years, three months on Monday, has been sent to prison, the Anadolu news agency reported.

Güven, a former deputy from the pro-Kurdish People’s Democratic Party (HDP) and current co-chairperson of the Democratic Society Congress (DTK), was sent to the Diyarbakır Women’s Prison on Tuesday after the Diyarbakır 9th High Criminal Court, which heard her trial, issued an arrest warrant on Monday.

“If I had wanted to flee, I could have done it a thousand times without you even noticing. I am not going anywhere. I will continue to do politics in this country. In prison or out, it doesn’t matter,” Güven said as she was being detained by police officers at the home of HDP deputy Semra Güzel in the early hours of Tuesday.

The politician, who stood trial due to her statements critical of a Turkish military operation in the Afrin region of Syria, was given the jail sentence on charges of membership in a terrorist organization and two counts of disseminating terrorist propaganda.

The HDP had nominated Güven as a member of parliament from Hakkari province in the 2018 general election.

“My mother has been arrested to serve her jail sentence of 22 years, three months. You will give an accounting for every tear shed by the Kurds. If not today, then tomorrow, but you definitely will,” she tweeted.

Güven was among three deputies along with HDP deputy Musa Farisoğulları and main opposition Republican People’s party (CHP) deputy Enis Berberoğlu who were ousted from parliament in June after the country’s top appeals court upheld their convictions on terrorism and espionage charges.

Güven and Farisoğulları were charged with links to the outlawed Kurdistan Workers’ Party (PKK) and Berberoğlu with disclosing government secrets.

Since a failed coup attempt in July 2016, the Turkish government has used state of emergency powers and sweeping anti-terrorism legislation to enact a widespread purge against the critics of Turkish President Recep Tayyip Erdoğan.

Thousands of politicians, civil servants, journalists, academics, lawyers and members of the military have been jailed over alleged links to the PKK and to Fethullah Gülen, an exiled cleric accused by Erdoğan of masterminding the failed putsch. Gülen strongly denies any involvement.

The Turkish government has also targeted the HDP aggressively, unseating its dozens of democratically elected mayors and arresting dozens of party politicians on politically motivated charges.

In the meantime, Turkish prosecutors launched an investigation into HDP deputies Güzel and Tayyip Temel on charges of harboring a criminal due to their support for Güven.