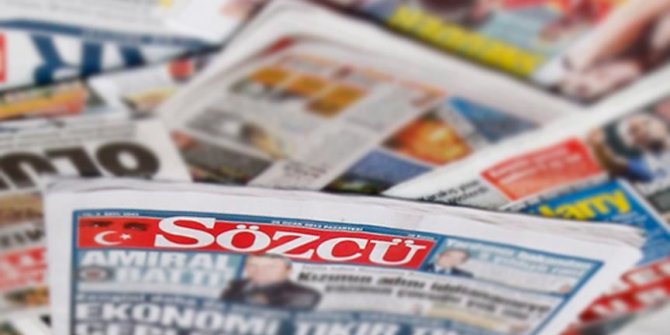 Turkish opposition newspaper Sözcü was levied a tax fine of TL 14.5 million ($1.8 million) for the year 2018 over what the paper on Wednesday said in a front-page report were baseless accusations by the Justice and Development Party (AKP) government.

“You will never succeed in preventing Sözcü from expanding even if you hand us tax fines, issue public advertising bans or throw us in jail,” the daily said, addressing the AKP government.

According to the report Turkey’s Press Advertisement Agency (BİK), a state body that distributes public sector advertisements among media outlets, issued a 10-day advertising ban on Sözcü for December 2020.

“The government-led oppression targeting Sözcü, which has always reported the truth without compromising its Kemalist editorial line, has been ongoing since the daily was founded [in 2007]. Despite all this intimidation and punishment, Sözcü has managed to stand tall. We won’t submit to anyone. You will not stop us. You will not silence us,” the daily said in the report.

In December 2019 six journalists and one other employee of Sözcü were convicted of aiding the Gülen movement, the network of US-based Muslim cleric Fethullah Gülen, who is accused by President Recep Tayyip Erdoğan and his AKP of masterminding a failed coup in 2016.

The government also labels the movement a terrorist organization, although Gülen and his followers strongly deny any involvement in the coup attempt as well as links to any terrorist activities.

Their sentences were upheld by a regional appeals court in İstanbul in October.

One of the leading jailers of journalists in the world, Turkey was ranked 154th out of 180 countries in the 2020 World Press Freedom Index published by Reporters Without Borders (RSF) in April.