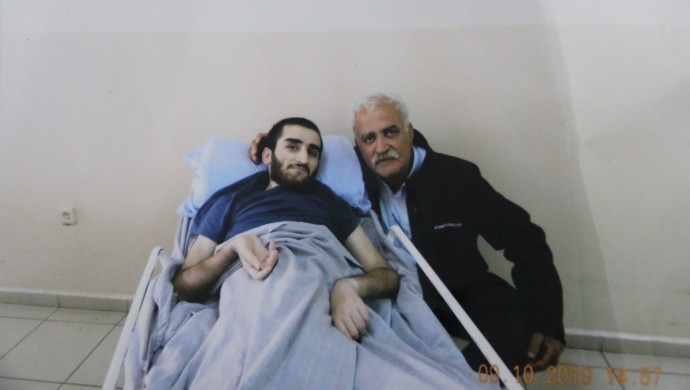 Turkey’s Constitutional Court has denied Abdullah Turan, 24, who is paralyzed from the neck down, release from prison despite a medical report stating that his health rendered him unfit to remain in a penal institution, the Stockholm Center for Freedom reported.

Turan was arrested for alleged membership in the outlawed Kurdistan Workers’ Party (PKK), an armed secessionist group designated as a terrorist organization by the US, the European Union and Turkey. The court said they denied Turan’s release because he continued to pose a threat to society as there was a possibility that he would continue taking part in PKK activities.

Lawyer Vedat Ece of the Independent Lawyer’s Association (ÖHD) said the court’s reasoning was far from the truth as Turan was in no condition to carry out any kind of activity.

Turan was paralyzed after he suffered brain trauma during a hunger strike when he was imprisoned in northwestern Trabzon province. He was protesting against the isolation of the PKK’s jailed leader, Abdullah Öcalan, who for a time was denied any visitors to his island prison. Turan was later moved to İstanbul’s Metris Prison.

Turan’s health took a turn for the worse twice after his paralysis, the second time on November 24, when he was taken to a hospital. According to a report by the Evrensel daily, Turan was examined by a doctor but did not receive any treatment. He was taken back to Metris Prison where he was put in a quarantine cell.

Ece said the hospital claimed there was no space for Turan because of COVID-19 patients and that was why they were compelled to send him back to prison without treatment. Ece argued that this made it even more important that Turan be released from prison.

Critics have slammed the government for refusing to release political prisoners, some of whom have been critically ill, during the pandemic.

Ömer Faruk Gergerlioğlu, a prominent human rights activist and a deputy from the pro-Kurdish Peoples’ Democratic Party (HDP), said that critically ill political prisoners were not released from prison “until it reaches the point of no return.” He depicted the deaths of seriously ill prisoners in Turkey who are not released in time to receive proper medical treatment as acts of “murder” committed by the state.