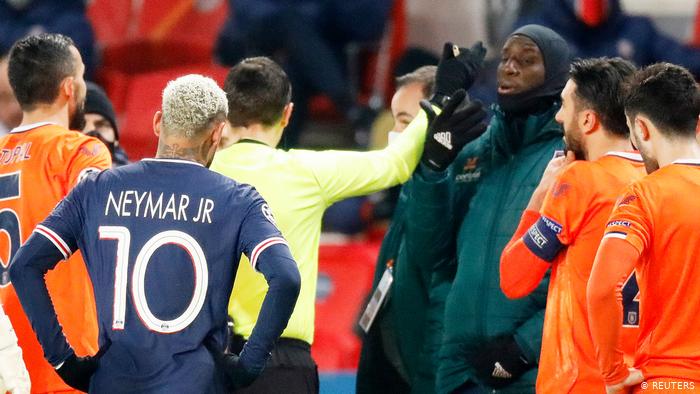 The Champions League fixture between Paris Saint Germain and İstanbul Başakşehir was abandoned by both team’s players, who walked off the pitch over a match official’s alleged racist remarks about a member of the Turkish club’s coaching staff.

The walkout occurred after Başaksehir’s Cameroonian assistant coach Pierre Webo was shown a red card in the 16th minute for protesting a refereeing decision, The Guardian said in a report on Tuesday.

Webo reportedly accused the fourth official, Sebastian Coltescu of Romania, of using a racial slur to describe him.

“The black one over there. This is not possible. Go and identify him. That guy, the black one,” Coltescu said in Romanian to other Romanian staff in the exchange in question, which was heard on television.

Television microphones also picked up an angry Webo repeatedly asking the official why the racist term was used to describe him.

They were audible in the empty Parc des Princes stadium as the match was being played behind closed doors because of the COVID-19 pandemic.

“You never say ‘this white guy,’ you say ‘This guy.’ So, listen to me, why when you mention a black guy do you have to say ‘this black guy’?” Başakşehir striker Demba Ba, a substitute on the night, was also heard asking Coltescu.

Assistant referee Coltescu claimed that he had said “negru” instead of “negro,” and that the word “negru” in the Romanian language only means “black man” without any pejorative connotation. Coltescu denied that he had any intention of insulting Webo.

The Başakşehir players walked off the pitch and the Parisians followed them around 10 minutes after the game, which started at 9:00 pm local time (2000 GMT), was stopped in the 14th minute while still goalless.

“Our players have taken a decision NOT TO go back on the pitch after our Assistant Coach Pierre Webo has been exposed to racist behavior by the 4th Official,” Başaksehir said in a statement issued on Twitter.

“If the fourth official is removed from the pitch, then we will restart,” Başakşehir football club’s president Göksel Gümüşdağ told Turkish television channel TRT Spor.

The Union of European Football Associations (UEFA) promised to launch a “thorough investigation” into the incident in a statement late on Tuesday, adding that the match would restart at 1755 GMT on Wednesday from where it stopped.

“After consultation with both clubs, UEFA has decided on an exceptional basis to have the remaining minutes of the match played tomorrow with a new team of match officials,” the European football authority said on Tuesday.

According to UEFA’s regulations for the Champions League, normally, any team refusing to play must forfeit the game and also faces a fine of 250,000 euros ($303,000).

“I strongly condemn the racist remarks made to Pierre Webo, member of the Başakşehir technical staff, and am convinced UEFA will take the necessary measures,” Turkish President Recep Tayyip Erdoğan, who is closely linked to the owners of Başakşehir, said in a tweet.

İzmir Mayor Tunç Soyer, from the main opposition Republican People’s Party (CHP), also commented on the incident, underlining that engaging in racial discrimination in this century is a shame on humanity.