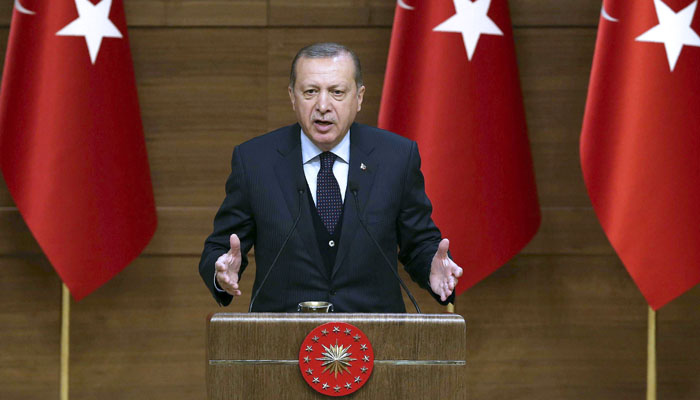 Turkish President Recep Tayyip Erdoğan said on Monday that leaders of the European Union should “accept the hand of friendship Turkey is offering,” calling on “all the actors to gather around the table” to deal with Ankara’s row with Greece and Cyprus over undersea resources, as the European Union mulls sanctions ahead of a key summit.

Turkey has enraged Greece and Cyprus by sending a survey ship and navy vessels to disputed waters purportedly rich in hydrocarbon resources, prompting Athens and Nicosia to push EU countries for tough sanctions at Thursday’s summit of EU leaders.

“The EU must do away with ‘strategic blindness’ and should not let itself be used as a battering ram in the eastern Mediterranean by Cyprus and Greece,” Erdoğan said, adding, “I am calling on all neighboring countries in the Mediterranean, especially Greece, not to see this issue as a zero-sum game.”

Turkey wants to see the Turkish Republic of Northern Cyprus (KKTC), a breakaway state recognized only by Ankara, at the table to settle the dispute.

“I believe a win-win formula that observes everyone’s rights can be found,” Erdoğan added.

Saying that Turkey will not “bow to threats and blackmail over the eastern Mediterranean,” Erdoğan said any plans or maps “excluding Ankara from its rights in the region” were unacceptable.

European foreign ministers will discuss measures against Turkey at their meeting on Monday before the coming summit.

“Germany has worked hard to facilitate a dialogue between the European Union and Turkey over the past months,” German Foreign Minister Heiko Maas said on Monday.

“But there have been too many provocations, and tensions between Turkey, Cyprus and Greece have prevented any direct talks. For this reason, we will talk about what consequences we should draw – also with a view to the EU summit this week.”

“The game of cat and mouse must end,” Michel told a news conference.

“In October, we defined a positive agenda, we reached out our hand,” said Michel, who chairs EU summits. “Turkey must stop its provocations, its hostile rhetoric,” he said.

“We will have a debate at the European summit on December 10, and we are ready to use the means at our disposal,” he said.

The EU’s attempts to persuade Ankara to stop exploring waters disputed by Greece and Cyprus have failed. But the bloc has so far refrained from imposing the sanctions that Athens and Nicosia are seeking.

“Time is running, and we are approaching a watershed moment in our relationship with Turkey,” EU foreign policy chief Josep Borrell said on November 20.

France is pushing the EU to sanction Turkey, a move that has been resisted by Germany, with Chancellor Angela Merkel touting the withdrawal of the drillship Oruç Reis as a “good sign.”

BBC’s Turkish edition said on Tuesday Merkel’s stance on avoiding sanctions on Ankara has weakened over the last two months, as Turkey also withdrew the Oruç Reis from contested waters ahead of an EU summit in October but later sent it back after it pronounced the summit’s outcome “unsatisfactory.”