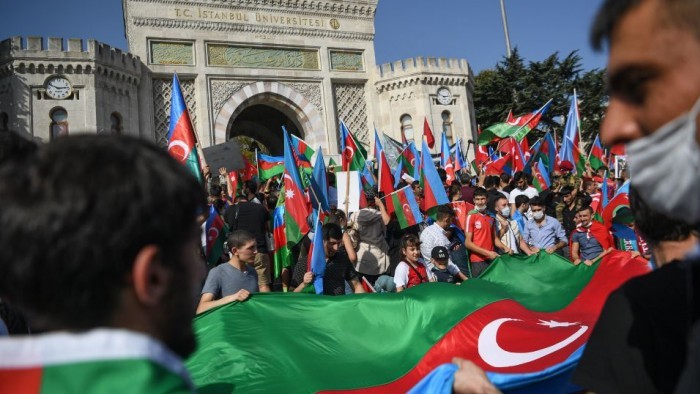 An armed conflict between Azerbaijan and Armenia over Nagorno-Karabakh has ended following a diplomatic intervention by Russia, which has become even more influential in the region as the brokered deal entails Russian military deployment in key locations in and around the region to oversee its implementation.

The clashes resulted in Azerbaijan seizing some of the territory it had lost at the beginning of the conflict some 30 years ago. Their military success contrasted with earlier escalations in the conflict and was partly the result of the considerable support extended by Turkey, with its military staff as well as its technology.

Turkey’s role in the fighting was often debated with a particular focus on the efficiency of armed drones. Azeri President Ilham Aliyev described the number of drones at their disposal as “adequate.” However, the Russian media claims that it was instead Turkish generals who tipped the military balance in Azerbaijan’s favor.

According to the report Maj. Gen. Ersay from the Turkish Land Forces’ Division of Planning and Operations was in command of the entirety of operations in Nagorno-Karabakh.

First step: Sacking of the Azeri chief of general staff

Prior to the onset of fighting in Nagorno-Karabakh, Azeri Chief of General Staff Gen. Najmeddin Sadikov was fired. Sadikov, who had been at the helm of the Azeri army for 27 years, is known as a pro-Russian general, and his ties to Russian President Vladimir Putin were seen as the reason he held the position for such a long time.

According to Turkish sources, Sadikov was responsible for alleged mobbing of Azeri officers trained in Turkish military academies as part of a military training agreement between the two countries.

Vzglyad claimed that after Sadikov’s sacking Turkish generals boosted their influence in Azerbaijan’s military and directly commanded Azeri troops in the latest clashes. The armed drones that considerably impacted the fighting in Azerbaijan’s favor were also controlled from a center under the command of a Turkish general, according to the report.

Three Turkish generals left for Azerbaijan before the escalation

Lt. Gen. Öngay, who was reportedly one of the Turkish commanders who took part in the clashes, is head of the 3rd Land Army deployed near Erzincan in eastern Turkey.

Interestingly, all three generals involved in the operations went to Azerbaijan before the start of hostilities.

Maj. Gen. Kahya is known for being close to Hulusi Akar, the Turkish minister of defense. Having previously served as ministry undersecretary, Kahya was appointed to another ministerial unit in 2019, namely the Directorate General for Administrative Services, which was created in same year, with Kahya becoming its first director general.

Russian media claimed that Kahya commanded Turkey’s armed drones used in operations in Nagorno-Karabakh. He had previously assumed a similar role in Libya where Turkey intervened on the side of the Tripoli-based Government of National Accord against General Khalifa Haftar’s self-styled Libyan National Army in the east.

Use of Turkish-made drones

In an interview with France24 on Oct. 15, Azeri President Aliyev was asked how many Turkish drones his country had. In response, the Azeri leader smiled and said: “We have an adequate number. The information needs to remain classified in order for us to achieve our goals, and we choose not to disclose it.”

In response to another question, Aliyev confirmed the difference made by the Turkish-made drones in their war effort.

“These are fairly modern and developed weapons. Thanks to the drones from Turkey, we have destroyed Armenian military equipment worth $1 billion,” Aliyev said.

Drones made of imported components

The TB2’s imaging and targeting systems are purchased from Canada’s L3Harris Technologies Inc.

Canada recently announced the suspension of arms exports to Turkey, citing their use in the clashes in Nagorno-Karabakh.