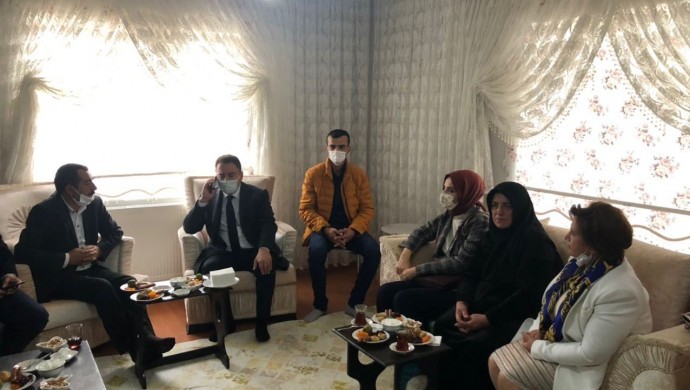 Ali Babacan, leader of the Democracy and Progress Party (DEVA), has visited the family of a Kurdish villager who was allegedly beaten to death by a group of soldiers in September in the eastern province of Van while calling on the Justice and Development Party (AKP) government to shed light on the incident.

Babacan’s visit to the family of Servet Turgut, 64, took place on the sidelines of his party’s first provincial congress in Van on Monday.

On Sept. 11 Turgut was detained along with 50-year-old Osman Şiban as part of an operation conducted by Turkish security forces in Van’s Çatak district. Their families found them in a hospital with serious injuries two days after their detention.

“Disclose what really happened to Servet Turgut and Osman Şiban, prosecute those responsible [for torturing them]. You must shed light on every single detail about the death of a 64-year-old villager. If you don’t, this nation will remember you as the political power that brought torture back to Turkey,” Babacan said at his party’s meeting in Van following the visit to Turgut’s family.

Initial reporting on the incident by rights groups and media outlets cited a medical report giving the reason for their admission to the hospital as a “fall from a helicopter.” According to Şiban, who had suffered partial memory loss due to his injuries, he and Turgut were violently beaten by Turkish soldiers both in the helicopter and after they were pushed out of it, when they were introduced as “terrorists.”

According to a report drafted by independent deputy and investigative journalist Ahmet Şık, the villagers were in fact thrown out of the helicopter but only after it had landed. The claim that they were thrown out of a helicopter when it was airborne was based on an “official lie” told by the gendarmes involved to cover their crimes.

Şık’s research revealed that gendarmes in civilian clothes took Turgut and Şiban to two separate hospitals and told the doctors that the two were terrorists who had attacked them and later jumped out of a helicopter when they were being transported after detention.

In a statement on Sept. 21 the Van Governor’s Office had denied the torture and claimed that the villagers were hospitalized after they fell from a cliff while running away from security forces despite an order to halt.

“Those who came to power pledging ‘zero tolerance’ for torture have ended up imposing zero penalties on those who use torture. To make matters worse, the torture, [the photos of which are] openly displayed, is embraced by the [AKP] government. They trample on human dignity by turning torture into a punishment policy.”

The DEVA chairman, also a former deputy prime minister from the ruling AKP, called on the government to do what must be done by a state of law.

“Turkey has become a country where human rights are systematically violated. People’s lives, health and dignity are disregarded by the ruling power. We are deeply sorry for what happened to Turgut and Şiban,” Babacan added.