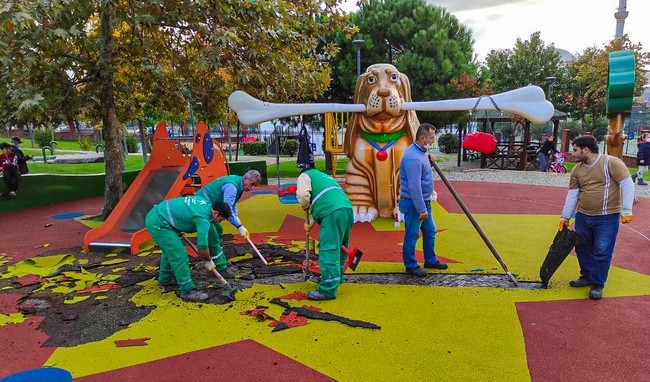 Süleyman Gevezoğlu, the deputy mayor of İstanbul’s Küçükçekmece District Municipality, was suspended after prosecutors launched an investigation into the design of a playground in the district due to the alleged use of symbols of the outlawed Kurdistan Workers’ Party (PKK).

The public parks and gardens director of the same municipality, which is led by Turkey’s main opposition Republican People’s Party (CHP), was also suspended on Friday as part of the probe launched by the İstanbul Chief Public Prosecutor’s Office.

According to a report by the state-run Anadolu news agency (AA), Küçükçekmece District Governor Turan Bedirhanoğlu said they received numerous complaints about Atatürk Park after its renovation by the district municipality.

The complaints were reportedly about the shapes on the rubber surfacing of the children’s playground — a black star inside a yellow circle and another one with a yellow star on a red background, allegedly resembling PKK symbols.

The PKK flag has a red star in a yellow circle, which is placed in a green ring on a red background.

Bedirhanoğlu said they reported the situation to the authorities and that municipal workers then removed the rubber surfacing. The municipality also released a statement about the incident apologizing for how the design of the playground was perceived and promising they would rebuild the park.

The prosecutors then launched an investigation into the incident and ordered the identification of the people who presented or approved the project for the renovation of the park and an inquiry of their “terrorist connections.”

The İstanbul Governor’s Office said in a public statement released on its official website on Friday that they had suspended the two officials at the opposition-led municipality in accordance with Article 137 of Turkey’s Civil Servants’ Act No. 657.