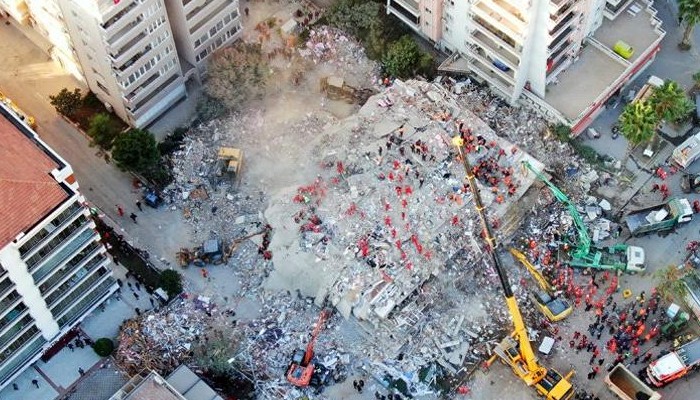 A powerful earthquake that hit the Aegean Turkish province of İzmir last Friday has killed a total of 114 people and injured 1,035, with search and rescue efforts ending, according to a statement from the country’s disaster agency on Wednesday.

Turkey’s Disaster and Emergency Management Agency (AFAD) said out of the 1,035 injured, 898 have been released from the hospital while 137 others are still receiving treatment.

Friday’s temblor was centered in the Aegean Sea northeast of the Greek island of Samos. There was some debate over the magnitude of the earthquake. While the US Geological Survey rated it 7.0, İstanbul’s Kandilli Institute put it at 6.9 and AFAD said it measured 6.6.

The earthquake leveled 17 buildings in İzmir, where the last survivor, a four-year-old girl, was pulled out from the rubble on Tuesday morning, 91 hours after the earthquake struck.

As of Wednesday morning, search and rescue efforts had ended and work has begun to clear the rubble of the flattened buildings.

On June 24, 41 people were killed when a 6.8 magnitude quake hit the eastern province of Elazığ.

In 2011 an earthquake struck the eastern city of Van and the town of Erciş, some 100 kilometers (60 miles) to the north, killing at least 523 people

In the country’s worst earthquake disaster, more than 17,000 people were killed in August 1999 when a 7.6 magnitude temblor struck the western city of İzmit, 90 kilometers (55 miles) southeast of İstanbul. About 500,000 people were made homeless.