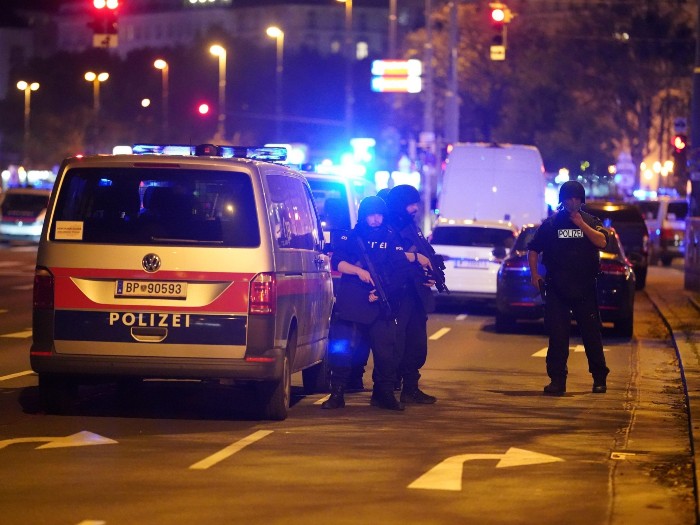 Turkish officials have condemned a terrorist attack in the Austrian capital of Vienna on Monday night that claimed the lives of four people and left at least 14 injured.

Austrian authorities said the assault was carried out by at least one suspect who was believed to have had an “Islamist motive” and was shot and killed by the police.

The suspect in the shooting, which began at 8 p.m. on Monday evening near Vienna’s main synagogue, had been radicalized and was an Islamic State and the Levant (ISIL) sympathizer, Interior Minister Karl Nehammer said during a press conference on Tuesday morning.

A number of Turkish officials expressed solidarity with Austria in the aftermath of the deadly attack, urging global cooperation against terrorism.

“Terrorism is the common enemy of all humanity. Sincere international cooperation is required against this scourge. We stand by the Austrian people on their day of sorrow,” Turkish Foreign Minister Mevlüt Çavuşoğlu said in a tweet.

The Foreign Ministry strongly condemned the attack in a separate statement, extending condolences to the families of those who died and wishing a speedy recovery to the wounded.

Fahrettin Altun, Turkey’s communications director, also denounced the attack, saying: “Turkey stands against terrorism and in solidarity with the Austrian people. We share your pain.”

“We must unite against terror, no matter where or from whom it comes,” the chairman of Turkey’s main opposition Republican People’s Party (CHP), Kemal Kılıçdaroğlu, tweeted on Tuesday.

İbrahim Kalın, a spokesperson for Turkish President Recep Tayyip Erdoğan, also offered condolences to the families of those who lost their lives, adding that Turkey is determined to continue its fight against terrorism.

“Terror has no color, race or faith. It is a crime against humanity, and we will continue our fight against it to the end,” Mahir Ünal, deputy chairman of Turkey’s ruling Justice and Development Party (AKP), said on Twitter.

Mustafa Şentop, a lawmaker from the AKP, also condemned the terrorist attacks in Vienna.

“Every act of violence targeting civilians, regardless of its agent, victim, reason or purpose, is terrorism and a crime against humanity. Global cooperation against terrorism has become an obligation,” he added.

“The terrible terrorist attack in #Vienna shocked me deeply. My condolences go out to the victims and their families. I hope the injured will recover quickly. I wish all Viennese strength and stand by them in these difficult hours,” Mustafa Yeneroğlu, a deputy from the Democracy and Progress Party (DEVA), also said in a tweet.