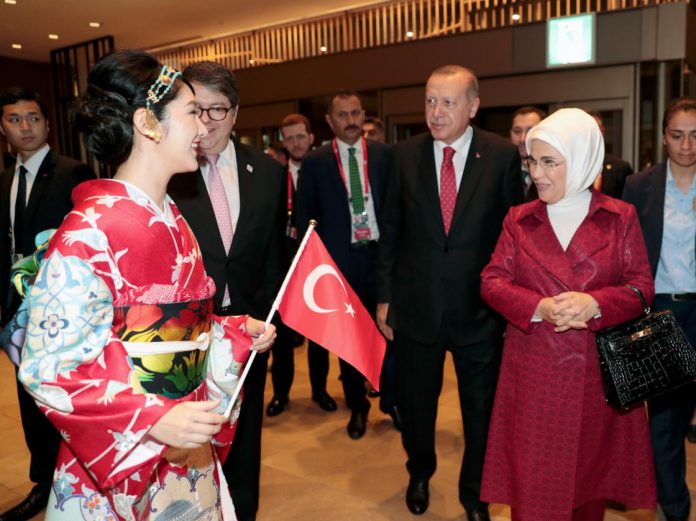 The president’s call for the boycott came amid a widening rift between Turkey and France after President Emmanuel Macron said in a speech earlier in October that Islam was a religion in crisis all over the world.

Turkish social media users posted thousands of tweets criticizing the Erdoğan family for their use of French-made goods following the boycott call, especially the first lady’s handbag, made by high fashion luxury goods manufacturer Hermès, established in France in 1837.

Kemal Kılıçdaroğlu, leader of the main opposition Republican People’s Party (CHP), on Tuesday urged Emine Erdoğan to join the boycott and burn her Hermès handbag in the garden of the presidential palace and say she’s protesting France.

Pointing out that Turks already can’t purchase French goods due to the country’s economic decline, the CHP leader added: “Therefore, the presidential palace socialites are the ones who can implement the boycott. You have French-made [Airbus] planes: Sell them immediately.”

Erdoğan responded to Kılıçdaroğlu’s call to his wife during a speech in parliament on Wednesday, saying: “If you have the guts, talk about me. Don’t talk about my wife. What kind of politician are you?”

Referring to the CHP leader’s suggestion of selling French-made planes, the president added: “What does that have to do with anything? Airbus is a strategic product. They are not only made by the French.”

Ömer Çelik, a spokesperson from Erdoğan’s ruling Justice and Development Party (AKP), claimed that Kılıçdaroğlu’s call to the first lady to burn her handbag was an example of “violence against women.”

Hande Fırat, a journalist close to the Erdoğan family, claimed in a column on Friday that Emine Erdoğan does not spend large amounts of money on her handbags but chooses instead to purchase imitations, prompting a new wave of criticism as it is illegal to buy or sell imitations in Turkey.

Photos of the first lady carrying a $50,000 Hermès handbag were first published in June 2019, when Turkish journalist Ender İmrek had appeared in court accused of insulting the president’s wife in a column titled “The Hermès purse was shining bright,” in which he said carrying the bag was “an insult to our people as they suffer from hunger and poverty.”

Earlier in October the prosecutor handling İmrek’s case demanded that the journalist be punished for the crime of insult and slander without specifying a reason why, according to Turkish media reports.

Commenting on the full charge against İmrek, which was cited as “insult by failing to attribute good qualities,” his lawyer Yıldız İmrek said: “Insult by not attributing good qualities means not liking somebody, criticizing them and even not praising them. My client is accused of insulting Emine Erdoğan because he did not praise her.”

In 2018 a Twitter user named Gürman pointed out that the cost of the handbag equals the annual minimum wage salary for 11 people in Turkey and six months of salary for the president.

“The presidential salary is TL 39,000, the first lady doesn’t work. Her purse alone cost $50,000, in other words, TL 215,000. That is equivalent to six months of Erdoğan’s salary. Are you telling me that the ‘man of the people’ spent six months of his salary to buy the first lady a bag? Stop insulting people’s intelligence,” Gürman, who has over 50,000 followers on Twitter, said.