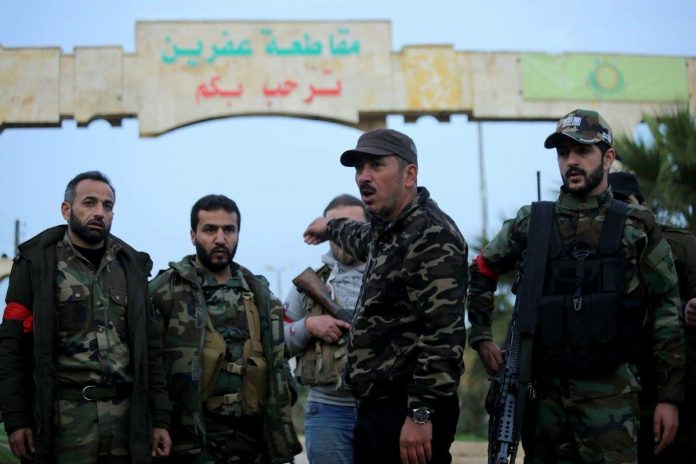 Twelve people, including five civilians, were killed in clashes among members of the Turkish-backed Sultan Murad Division on Tuesday in Ras Al-Ain, where Turkey established a buffer zone after it launched an offensive against Kurdish militia in the region, the Syrian Observatory for Human Rights (SOHR) reported on Wednesday.

Members of the Sultan Murad Division reportedly quarreled over the sharing of revenues at the Al-Duwayrah checkpoint. The dispute then evolved to an armed fight with heavy weapons and expanded into the city of Ras Al-Ain, causing damage to houses due to indiscriminate shelling and killing five civilians, including a woman and a child.

Light and medium weaponry and RPGs were reportedly used in the clashes in which 15 were injured and taken to hospitals in Turkey.

Factional fights are common in the rebel-held areas under the control of Turkish forces. Earlier in October, similar clashes between the Turkish-backed Jaysh Al-Sharqiyyah and Sultan Murad Division were reported in the same city.

Turkey has established direct control over swathes of land in northern Syria through successive offensives against the People’s Protection Units (YPG) since 2018. The YPG, a Syrian Kurdish armed group that played a crucial role in the coalition task force set up to defeat the Islamic State in Iraq and the Levant (ISIL), is viewed by Ankara as an offshoot of the outlawed Kurdistan Workers’ Party (PKK) and thus a terrorist organization.

Rights groups and organizations that monitor the region have since accused Turkish soldiers and Turkish-backed rebels of committing war crimes against the local population during the cross-border offensives.

Turkey launched the Operation Peace Spring offensive on Oct. 9, 2019, targeting the YPG along the Turkish-Syrian border. The Turkish military operation began days after a surprise and widely criticized White House announcement that US forces would withdraw from the region.

“Turkish forces have displayed a shameful disregard for civilian life, including through summary killings and unlawful attacks that have killed and injured civilians,” a report by Amnesty International compiling alleged war crimes committed during Operation Peace Spring said.