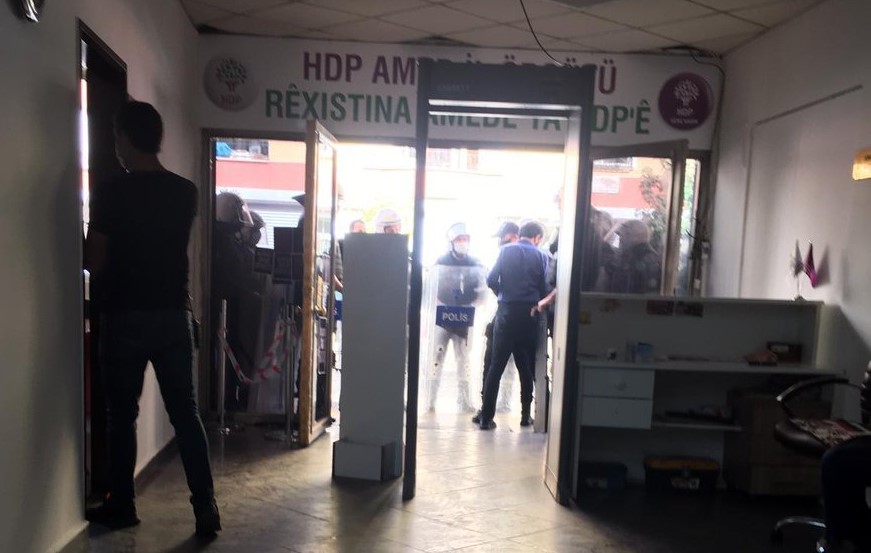 Turkish police have detained the Diyarbakır provincial co-chairs and Yenişehir district co-chairs of the pro-Kurdish Peoples’ Democratic Party (HDP) following a raid on the party’s buildings in the predominantly Kurdish-populated southeastern province of Diyarbakır, the Mezopotamya Agency (MA) reported on Thursday.

The detentions were carried out after Diyarbakır counterterrorism and riot police raided the HDP buildings.

Ceylan and Uyanık recorded a video as they were waiting to be detained following the police raid, saying they have been “experiencing these acts of oppression and tyranny for a long time now and are determined to fight against them.”

Ayşe Acar Başaran, the HDP’s deputy from Batman and Women’s Assembly spokesperson, underlined while speaking in parliament that police officers raided the party’s buildings “like gangsters.” She added that the detentions demonstrate once again that it is “forbidden” for the HDP to do politics in Turkey.

“There is no logical reason for them to search the provincial building, where they keep watch 24 hours a day. This is nothing but criminalization. The HDP did not and will not bow to you!” Semra Güzel, the HDP’s Diyarbakır deputy, said in a tweet.

HDP Kars Co-mayor Ayhan Bilgen and 16 other party officials were arrested earlier in October over their alleged role in protests in Kurdish majority cities against what is seen by many as the Turkish government’s tacit approval of the Kobane siege in 2014, when Islamic State in Iraq and the Levant (ISIL) militants laid a prolonged siege to a Kurdish town in northern Syria.

Describing the latest operations targeting HDP members as “a blow to faith in the ways of the democratic struggle in Turkey,” Bilgen added they are aiming to lay the groundwork for new regulations to prevent the pro-Kurdish party from taking part in elections and receiving financial support.

The Turkish government also implemented the controversial practice of removing and arresting mayors in HDP-run cities and towns during a two-year state of emergency that was declared days after an attempted coup on July 15, 2016.