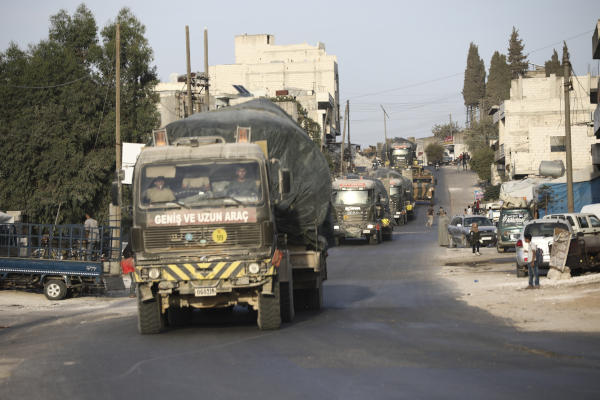 Turkey has started withdrawing from military posts in Syria’s northeastern Idlib region that were surrounded by Damascus-controlled territory, the Syrian Observatory for Human Rights (SOHR) reported on Tuesday.

The move came after the deployment of troops in newly established bases in the parts of the region controlled by Turkish-backed factions.

According to observers, the recent actions signal a change in the Turkish strategy to protect its military posts surrounded by Syrian forces in the event of renewed clashes and prepare for possible frontline clashes.

The Turkish forces were reported on Tuesday as vacating its largest post of Morek in the Hama countryside. Six more posts have reportedly been in preparations for withdrawal.

The withdrawal followed new deployments of Turkish troops and armored vehicles last week. The convoys were headed towards a new military post established in the western part of Jabal al-Zawiya, in the village of Qoqfin.

Turkey has 12 observation stations in Idlib province, nine of which had already been surrounded by the forces of Syrian President Bashar al-Assad during clashes in March, prior to concluding a ceasefire with Russia. Turkey then lost 60 Turkish soldiers around its military posts, while Turkish-backed rebels had lost control of a big chunk of territory in the region.

Turkey had allegedly failed to supply its nine posts for 30 days during the March fights as they were isolated behind Syrian regime lines. Since then, the Syrian regime had further pressured the Turkish stations by settling “so-called civilians” around the military posts, according to a report by Middle East Eye.

Turkey’s withdrawal reportedly came after Russia adopted a counter strategy in Idlib in reaction to Turkey’s involvement in clashes in another region. In the recent conflict between Azerbaijan and Armenia over Nagorno-Karabakh, Ankara militarily backs the former, while Moscow supports the latter.

“Most probably, Russia did not give some guarantees for securing the Turkish convoys supplying those observation posts,” Oytun Orhan, coordinator for Levant studies at the Center for Middle Eastern Studies in Ankara, told Al-Monitor in reference to the changed Russian approach.

A security source speaking to TRT World said, “I think these withdrawals are clearly related to the Turkish expectation of a new military operation by the Assad regime supported by Russia and Iran.”

“In the event of a military escalation in Idlib, the weakest point for Turkey are these observation posts because they are way behind the front lines. The geographic distance is a threat for Turkey,” added the source, who wanted to remain anonymous.

Since the March ceasefire, Russian forces had until recently escorted Turkish supply missions in order to protect them from Syrian fire. The situation in the region started changing in September, when talks between Turkish and Russian officials failed.

As in the case of Nagorno-Karabakh, Turkey and Russia back opposing sides in Syria’s war, with Ankara supporting the rebels and Moscow backing Damascus. With the brokered partial ceasefire, the fighting has significantly decreased, with continuing intermittent airstrikes and artillery attacks from both sides.

According to a 2017 agreement, the posts have served in principle to monitor fragile ceasefires during the nine-year conflict. Idlib is the last rebel stronghold in the country.

Turkey has also pledged to disarm and remove rebel groups aligned with extremist militias. However, it has repeatedly been accused by Russia of not fulfilling its commitments. In response, Turkey argues that Moscow has not honored the deal by failing to stop daily shelling by the Syrian regime.

The joint Russian-Turkish military patrols, which aimed at creating a security corridor on both sides of the M4 highway running east-west through Idlib, have also been suspended for security reasons. The patrols recently came under fire by the Khattab al-Shishani Battalions, a new and opaque militant group. Moscow holds Ankara responsible for the attacks as it has not handed over the territory below the M4 to al-Assad control.

Turkish involvement in the Syrian conflict has sparked a strong backlash from the international community. In August 68 members of the European Parliament called on Ankara and its proxy forces “to end their illegal occupation” in northern Syria and retreat from the region.

On October 8 Turkish President Recep Tayyip Erdoğan said Turkish troops would withdraw from Syria as soon as a sustainable solution to the civil war had been reached. Turkey was the country most affected by the Syrian conflict, in which it was forced to intervene due to security risks on its borders, Erdoğan said during an official visit to Qatar, Turkey’s only ally among Arab countries in the Gulf region.

Erdoğan’s Turkey has also been criticized for intervening in the Gulf region by backing Qatar against Arab states, most notably Saudi Arabia and the United Arab Emirates (UAE).