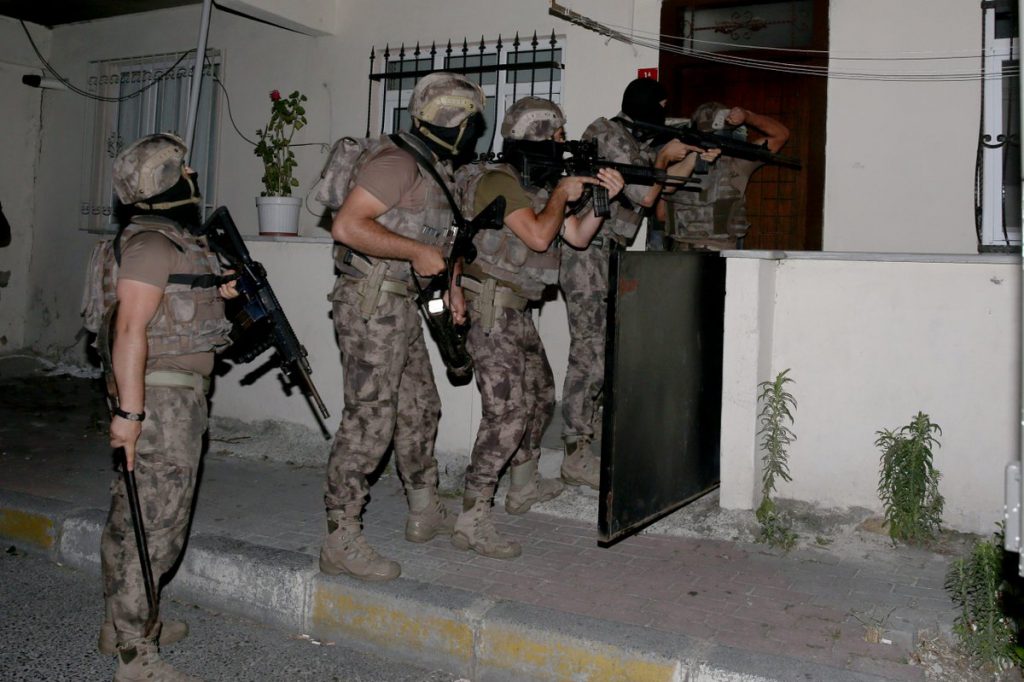 The country already has tens of thousands of political prisoners, and Friday morning saw dawn raids aimed at pro-Kurdish politicians, a group of left-leaning activists who are active under the name İsimsizler Hareketi (the Anonymous Movement), whose leader Taylan Kulaçoğlu has been jailed for four months for insulting President Recep Tayyip Erdoğan, and academics with alleged ties to the Gülen movement, a religious group inspired by Muslim cleric Fethullah Gülen, whom Ankara accuses of masterminding a failed coup in 2016.

The Ankara Chief Public Prosecutor’s Office has ordered the detention of 82 prominent pro-Kurdish politicians, with some of them taken into custody as of Friday morning in police raids, the state-run Anadolu news agency (AA) reported.

According to AA, the detention warrants were issued over the politicians’ alleged role in protests in Kurdish majority cities against what is seen by many as the Turkish government’s tacit approval of the Kobane siege in 2014, when the Islamic State in Iraq and the Levant (ISIL) militants laid a prolonged siege to a Kurdish town in northern Syria.

Ankara Chief Public Prosecutor Yüksel Kocaman recently sparked criticism for visiting Turkish President Recep Tayyip Erdoğan at the presidential palace with his bride immediately after their wedding. The visit has become a subject of discussion as an indication of the current state of judicial independence, or lack thereof.

According to the prosecution’s statement, the raids concern same case in which former HDP Co-chairs Selahattin Demirtaş and Figen Yüksekdağ are currently imprisoned.

Police special operations teams armed with with automatic rifles accompanied the police to detain the academics at dawn, according to a report by the Kronos news website.

Turkey dismissed nearly 7,000 academics over alleged Gülen links after the failed 2016 coup. The same period saw the closure of 15 universities on the same accusations.

The third target of the morning raids were left-leaning activists who operate a Twitter page called İsimsizler Hareketi. Taylan Kulaçoğlu, the founder of the group, was already jailed for insulting Erdoğan.

“We want to revive the relations between the EU and Turkey,” President Erdoğan said in a letter addressing European leaders who are going to meet to discuss possible sanctions on Turkey over maritime tensions in the Aegean and Mediterranean seas.

However, the country seems to be heading in the opposite direction, according to critics, who draw a parallel between the recent increase in police raids targeting opposition figures and the failure to gain “a glorious victory to be exploited in domestic politics.”

“After getting knocked down to size in Libya and the Aegean, they turned toward the Kurds,” tweeted critical journalist Ergun Babahan.

The most outrageous was a recent allegation that two Kurdish villagers were thrown from a helicopter by soldiers.

Raids on alleged members of the Gülen movement have started to intensify, with more than 50 detained daily.

The crackdown on dissent also includes figures from the left-leaning opposition who are more active on social media platforms, with former academic and activist Nuriye Gülmen and Acun Karadağ recently detained.

Ankara recently enacted legislation to control social media. These regulations, by which the country would archive data on the identities of all Turkish social media users, foresee hefty fines for companies that refuse to comply with court orders.

Amnesty International’s Turkey researcher Andrew Gardner labeled the social media bill as “the most brazen attack on free expression in Turkey. Journalists already spend years behind bars for their critical reporting and social media users have to police themselves in fear of offending the authorities.”

According to Amnesty International, “The Internet Law significantly increases the reach of the government to police and censor content online, exacerbating risks to those who are already ruthlessly targeted by the authorities simply for expressing dissenting opinions. Independent media have, in addition, been all but extinguished after years of government-enforced closures of media outlets, unfounded prosecution of journalists, and other forms of intimidation.”

Another measure viewed by critics as “draconian” or even “dystopian” was a move announced by Interior Minister Süleyman Soylu to connect “all the cameras [CCTV, or security cameras] in the country” to the presidential palace in Ankara.

According to analyst Fatih Yurtsever, Erdoğan is turning the restrictive power he yields through COVID-19 measures to his advantage and is transforming the country into “a digital dictatorship like China.”