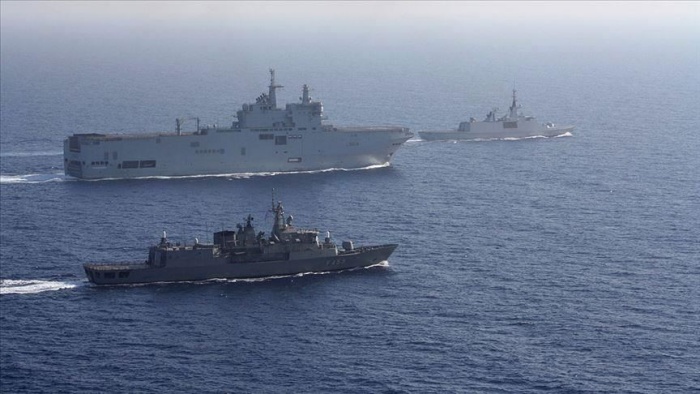 The father of Turkey’s controversial new maritime doctrine told AFP that France’s decision to send warships to help Greece out in its Mediterranean standoff with Ankara was adding “fuel to the fire.”

While he might be retired, the “Blue Homeland” vision that Rear Adm. Cem Gürdeniz, 62, helped craft over a decade ago is being turned into reality by Turkish President Recep Tayyip Erdoğan today.

As warships from France, Greece and Turkey converged on a disputed patch of the eastern Mediterranean Sea, Gürdeniz looked at ease while criticizing French President Emmanuel Macron.

“For many Turks now, France is acting like an ‘enfant terrible.’ Can you imagine, they are threatening Turkey?” he asked.

“If France continues such provocative actions … that would not serve regional peace and stability — that would add fuel to the fire, and France should avoid that.”

The discovery of major natural gas deposits in waters surrounding Cyprus and the Greek island of Crete have triggered a scramble for energy riches and revived old regional rivalries.

The biggest tensions are between historically uneasy NATO allies Turkey and Greece, which almost went to war over some uninhabited islets in the Aegean Sea in 1996.

These have been growing progressively more serious as Erdoğan lays claim to waters designed to turn Turkey into the maritime powerhouse Gürdeniz envisioned from the start.

“If Greece pulls the trigger, it will be the end of NATO,” Gürdeniz said, implying that Turkey would then withdraw from the Cold War-era military alliance.

“European countries should put pressure on Greece so that it abandons” some of its maritime claims, he said.

Erdoğan has tempered his heated rhetoric with calls for talks, which have been spearheaded with sporadic success by German Chancellor Angela Merkel.

But he saw no need for outside mediation, suggesting that hostilities will only end when Greeks and Turks sit down and frankly talk their problems out.

He called Turkey’s decision to rupture its relations with Egypt following the army’s ouster of Islamist president Mohamed Morsi in 2013 “a mistake.”

“Turkey could have won over Egypt. Also, starting with Egypt, we could have made some gains with Israel, too,” Gürdeniz said.