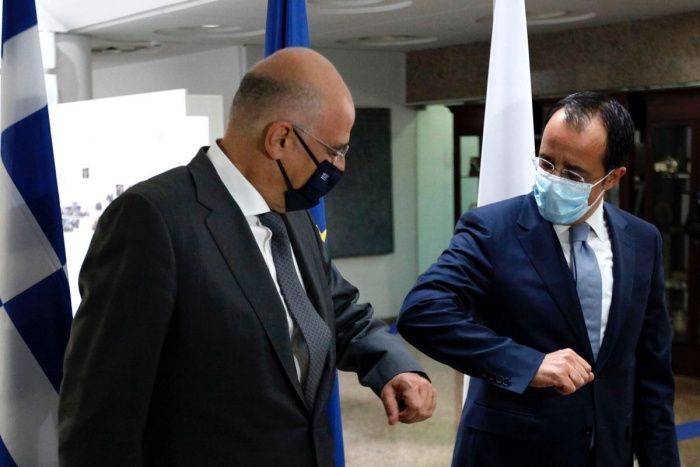 Cyprus and Greece on Tuesday urged the European Union to take a tougher stance against Turkey’s activities in the eastern Mediterranean, AFP reported.

Greek Foreign Minister Nikos Dendias made an unscheduled trip to Nicosia to coordinate policy among the two EU allies, as a crisis started brewing after Turkey sent naval ships into disputed waters.

Nicosia and Athens seek a tougher stance from Brussels as they argue that Turkey has violated their sovereignty as well as that of the EU.

“The escalation of Turkish aggression” is directed at the EU, Dendias told a news conference.

“Turkish provocations show contempt for the clear positions of the EU, the US … contempt for European values, international law … and constitute unacceptable militarization,” he said after meeting with Christodoulides.

He accused Turkey of playing a “destabilizing role” in the region.

“For a long time, Cyprus and Greece have pointed out that the appeasement of Mr. Erdogan would result in an unprecedented escalation of Turkey’s delinquent behavior,” Christodoulides said, referring to Turkish President Recep Tayyip Erdoğan.

Tensions were stoked last week when Ankara dispatched a research ship, the Oruc Reis, accompanied by Turkish naval vessels off the Greek island of Kastellorizo.