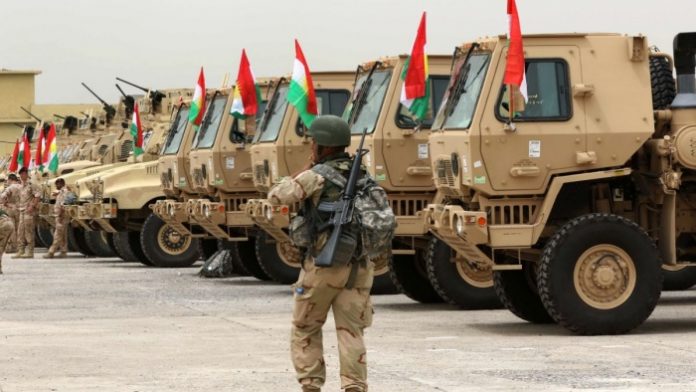 A group of Peshmerga forces came under fire from both the Kurdistan Workers’ Party (PKK) and Turkish forces in the Sidakan area of northeastern Erbil province in Iraq on Friday, according to a Peshmerga commander who said there were no casualties, according to the Rudaw English news website.

“At 10:15 am we wanted to go to the memorial ceremony for Brigadier Zuber Hali in Gurasha,” Colonel Salam Mohammed, commander of Peshmerga Battalion 2, told Rudaw English. Hali was an Iraqi border guard killed in a Turkish drone strike on Tuesday.

“Suddenly, we came under fire from behind from the PKK side. Then Turkish army fired at us from their side as well. Our car’s tire was punctured,” Mohammed recounted.

He was traveling in a group of 10 Peshmerga in two vehicles. They did not return fire to either side “because we are in the region to protect its residents, not to attack anyone.”

When the incident occurred, the Peshmerga were driving in an area known for clashes between the PKK and Turkish forces.

Ihsan Chalabi, mayor of the Sidakan area who was not at the scene but spoke to people involved, told Rudaw English that the PKK opened fire first.

The PKK, an armed Kurdish group fighting for greater cultural and political rights in Turkey, has its headquarters in Iraqi Kurdistan’s Qandil mountains. Turkey launched an air and ground operation against the PKK within the Kurdistan region borders on June 15. At least seven civilians have been killed by Turkish attacks.

This week, two Iraqi border guard commanders and a soldier were killed in a Turkish drone strike while they met with a PKK delegation. Baghdad and Arab and European allies have criticized Turkey’s violations of Iraqi sovereignty.

The United States has urged Ankara to coordinate its anti-PKK activities with Baghdad.