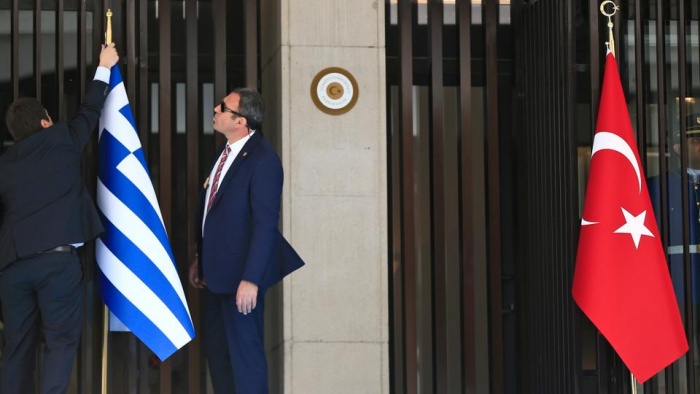 Turkey wants to resolve its dispute with Greece over energy exploration in the eastern Mediterranean through dialogue, Defense Minister Hulusi Akar said on Wednesday, while vowing to defend Turkey’s coastal interests, Reuters reported.

Turkey and Greece, NATO allies, vehemently disagree over overlapping claims to hydrocarbon resources in the region based on conflicting views on the extent of their continental shelves in waters dotted with mostly Greek islands.

Tensions rose when Ankara sent an exploration vessel on Monday to a disputed area of the Mediterranean, accompanied by warships. Greece says the Oruc Reis is operating illegally in its continental shelf, accusations that Ankara has dismissed.

However, he added that Turkey would continue to defend its “rights, ties and interests” in coastal waters. “It should be known that our seas are our blue homeland. Every drop is valuable,” he said.

Turkey says it has the longest coastline in the eastern Mediterranean but that it is penned in to a narrow strip of water due to the extension of Greece’s continental shelf, based on the presence of many Greek islands near its shore.

Akar singled out the Greek island of Kastellorizo, some 2 kilometers off Turkey’s southern coast and 570 kilometers from the Greek mainland, as a particular source of Turkish frustration.

“Greece’s demand for a 40,000 square kilometer maritime jurisdiction zone because of the 10 kilometer square Meis island [Kastellorizo] … cannot be reconciled with any logic,” he said.

Greece’s claim to the waters around Kastellorizo is based on a UN maritime convention endorsed by many countries but not Turkey.

Ankara said on Tuesday it would issue new exploration and drilling licenses in the eastern Mediterranean, while Greek Foreign Minister Nikos Dendias urged Turkey to “immediately leave the Greek continental shelf,” saying Athens was determined to defend its rights.

European Union foreign ministers will discuss the issue in an emergency teleconference on Friday at the request of the Greek government. Dendias will also meet his US counterpart, Mike Pompeo, in Vienna on Friday to discuss the dispute.