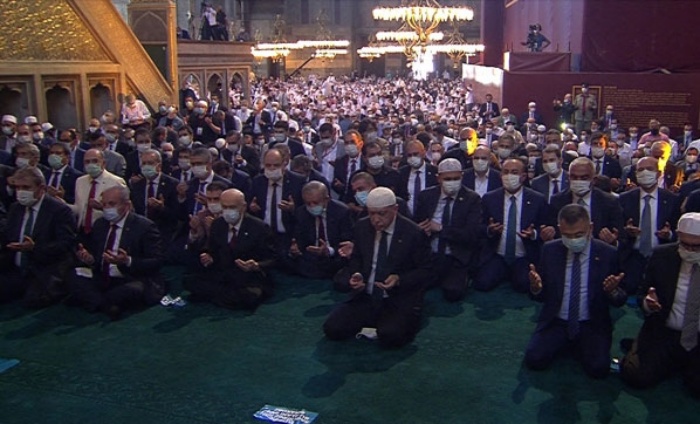 Turkey’s president, Recep Tayyip Erdoğan, joined huge crowds on Friday for the first prayers at Hagia Sophia in nine decades, sealing his ambition to restore Muslim worship at an ancient site long revered in both Christianity and Islam, Reuters reported.

After the call to prayer rang out from four minarets surrounding the mosque, whose rose-pink walls and huge grey dome have dominated İstanbul since Christian Byzantine times, hundreds knelt in prayer inside the building.

Outside, tens of thousands more prayed in a public square and on sidewalks, squeezing into spaces between cars or in cafes, joining a ceremony which many saw as righting a historic mistake when the mosque was converted to a museum in 1934 by modern Turkey’s secularist founder, Mustafa Kemal Atatürk.

Hagia Sophia was the largest cathedral in the world for 900 years until its capture by Ottoman Sultan Mehmet the Conqueror in 1453, after which it was one of Islam’s most exalted mosques for nearly 500 years.

Pope Francis said he was deeply saddened by the decision, which came after a top Turkish court annulled Hagia Sophia’s status as a museum two weeks ago. Erdoğan immediately issued a decree converting it once again to a mosque.

In Greece church bells tolled in mourning on Friday. A vast majority of Greeks consider the monument central to their Orthodox Christian religion. Greek criticism of the conversion has been scathing, underscoring the countries’ tense relations.

Several hundred invitees joined Erdoğan for the ceremony inside the sixth-century building. Some, including his son-in-law and Finance Minister Berat Albayrak, could be seen recording images of the historic occasion on their mobile phones.

The president, his head covered by a white prayer cap, read a Quranic verse before the head of Turkey’s religious directorate, Ali Erbaş, addressed worshippers.

“The longing of our nation, which has turned into heartbreak, is coming to an end today,” Erbaş said from the pulpit, holding a sword in his hand.

Newly installed white curtains covered an image of Mary and Jesus which would have faced the worshippers, but pictures of angels were still visible on arches supporting the mosque’s cavernous dome.

Officials say that glittering mosaics and other art in the main hall will be concealed during prayer time, but will remain uncovered in other parts of the building.

Earlier, crowds formed at checkpoints around the historic heart of İstanbul where massed police maintained security. Once through the checks, worshippers sat apart on prayer mats in secured areas outside the building in Sultanahmet Square.

A large screen and speakers set up in the square broadcast proceedings to a crowd which Erdoğan said was 350,000 strong.

As the crowds grew, leaving little space for social distancing, İstanbul Governor Ali Yerlikaya said authorities had stopped people from entering the area due to concerns about the spread of the coronavirus. On Twitter he called for patience and said the mosque would be open for prayer until Saturday morning.

After leaving Hagia Sophia, Erdoğan went straight to the nearby Fatih (Conqueror) mosque, named after Sultan Mehmet, who seized Istanbul for the Ottomans.

“Hagia Sophia will continue to serve all believers as a mosque and will remain a place of cultural heritage for all humanity,” Erdoğan said at Mehmet’s tomb. “We said, ‘Let’s visit the tomb of Sultan Mehmet the Conqueror, the real owner’.”