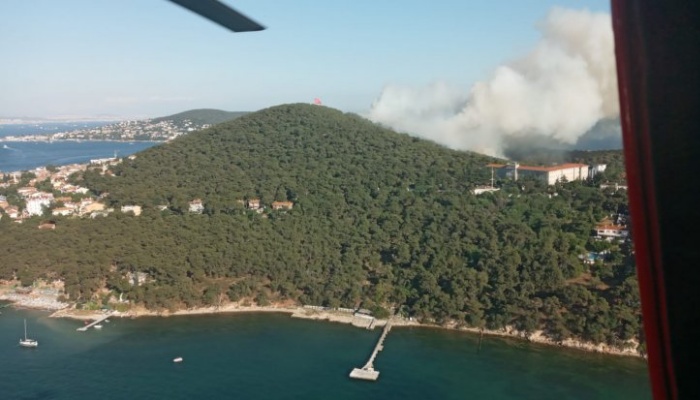 Three suspects have been detained as part of an investigation into a forest fire that broke out on Heybeliada, one of the Princes’ Islands off the coast of İstanbul, the state-run Anadolu news agency reported, citing local officials.

Following inspections at the scene of the fire, Agriculture and Forestry Minister Bekir Pakdemirli said an investigation into the blaze was ongoing.

“We survived this fire with minimum damage of around five hectares [12.3 acres],” he said.

“The fire was brought under control at 19:45. Cooling efforts are continuing,” said Istanbul Governor Ali Yerlikaya.

Forest teams first responded at 17:36 to the fire, which broke out at 17:33, Yerlikaya said, adding that he was on his way to the island.

At least six helicopters, two planes and 21 water trucks were deployed to battle the fire.

Residents with training in firefighting were also called to aid extinguishing efforts by the Adalar Municipality.

Flames erupted at two different points in forested areas on Heybeliada, according to the provincial governor’s office.

“To extinguish the fire, three helicopters and two water trucks were sent from adjacent provinces by the agriculture and forestry minister,” it said, adding that a “wide-scale investigation” had been launched into the fire.

Heybeliada is one of the four Princes’ Islands in the Marmara Sea and the second-largest among Büyükada, Burgazada and Kınalıada, famed for their natural forests.