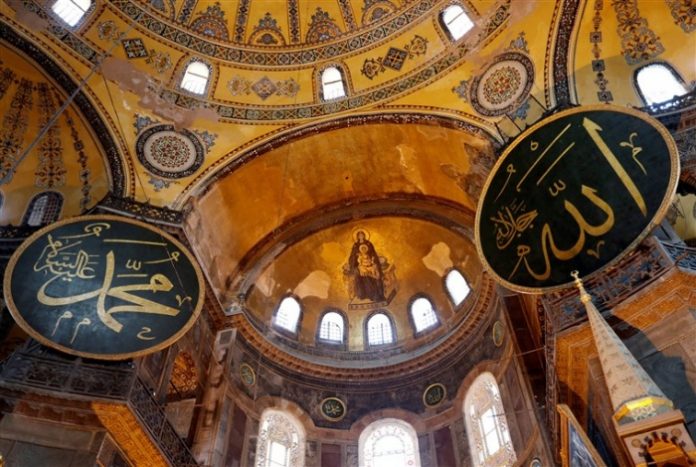 Russian officials and the Orthodox church on Monday urged caution over calls in Turkey to alter the status of the Hagia Sophia, the historic former cathedral in İstanbul, AFP reported.

Turkey’s top court is debating whether one of the architectural wonders of the world can be redesignated as a mosque, a move that could inflame tensions with the West and the Christian community.

A ruling expected in the coming days on the site, which is currently a museum.

The head of Russia’s Orthodox Church Patriarch Kirill said he was “deeply concerned” by the moves, describing Hagia Sophia as “one of the greatest monuments of Christian culture.”

“A threat to Hagia Sophia is a threat to the whole of Christian civilization, and therefore to our spirituality and history,” the Orthodox church leader said in a statement.

“To this day, for every Russian Orthodox person, Hagia Sophia is a great Christian shrine,” he said, urging the Turkish government to be cautious.

He said that altering the current neutral status of the historic building would cause “deep pain” among the Russian people.

Kremlin spokesman Dmitry Peskov said the future of the historic site was a domestic Turkish issue but added that he hoped Hagia Sophia’s status as a World Heritage Site would be “taken into account.”

He said the former cathedral was a “world masterpiece” that has “sacred value” for Russians.

Deputy Foreign Minister Sergei Vershinin told reporters Russia hopes “the global significance of the object will be taken into account.”

Hagia Sophia was first constructed as a cathedral in the Christian Byzantine Empire in the sixth century but was converted into a mosque after the Ottoman conquest of Constantinople in 1453.

Transforming it into a museum was a key reform of the post-Ottoman authorities under the modern republic’s founder, Mustafa Kemal Ataturk.

But calls for it to serve again as a mosque have sparked anger among Christians and tensions between historic foes and uneasy NATO allies Turkey and Greece.