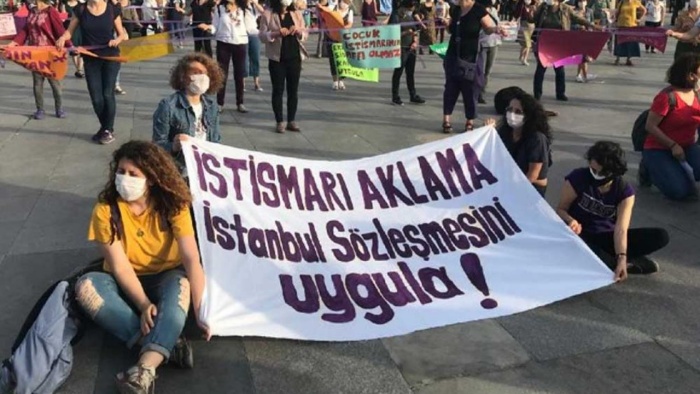 The İstanbul Convention, signed by member countries of the Council of Europe in 2011 to promote women’s rights and prevent domestic violence in societies, has split views inside Turkey’s ruling Justice and Development Party (AKP).

“The convention has become the mother of all evils for some,” AKP group deputy chairman Özlem Zengin said on Tuesday in response to Numan Kurtulmuş, the party’s vice president.

Kurtulmuş last week implied Turkey would withdraw from the convention, which has recently turned into a matter of debate, criticized by some pro-government, conservative journalists for promoting homosexuality in society and encouraging women to leave their husbands.

President Recep Tayyip Erdoğan last year drew attention to the matter, saying that he had heard some discontent from conservative communities regarding it.

However, the convention, signed by 45 countries and the European Union, is a human rights treaty that specifically deals with the issues of domestic violence and injustice towards women.

After signing it Turkey added Article 6284 to its Civil Law, which defined the rights of women who feel threatened in their homes.

“People talk about things like alimony, homosexuality, but these are not written in the convention,” Zengin said on a TV program, not ruling out the possibility of withdrawing from the agreement.

The article also mentions people who are subjected to violence due to their sexual orientation.

Conservative newspapers mainly claim that the İstanbul Convention has destroyed families by introducing “foreign terminology” to traditional Turkish values and the law.

“The first of them is gender. The İstanbul Convention is built on the concept of gender. … In the simplest terms, it holds that the identities and the biological sexes of men and women are constructed by the society, and envisions a fight against it. It doesn’t accept the distinction of the sexes,” Ebru Asiltürk, a prominent Islamist politician from the opposition Felicity Party (SP), wrote in May.

Hilal Kaplan, a pro-Erdoğan journalist, also in May wrote that Article 6284’s definition of violence was too broad, that it has invited state officials into the domestic sphere.

The article has shortened the path to obtaining a restraining order against husbands, a move that is strongly criticized by the conservatives as breaking the family apart.

President Erdoğan has repeatedly said he sees gender equality as contradictory to the nature of men and women.

“Feminists doesn’t understand motherhood,” he said in a 2014 speech, claiming that Islam accords women high value due to their ability to bear and raise children.

“A Muslim believer would not commit domestic violence,” he added.