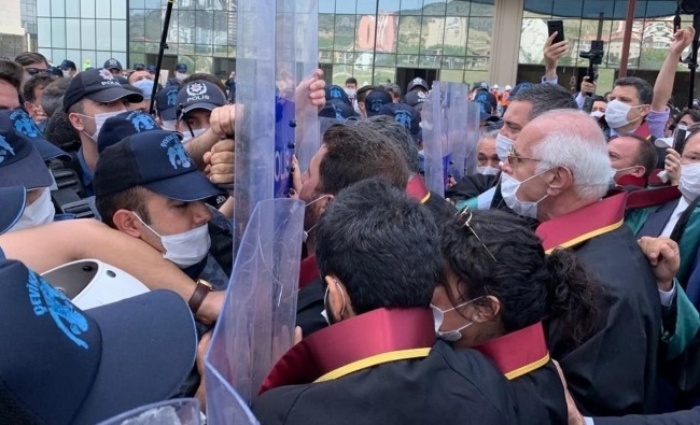 Turkish authorities on Tuesday allowed a group of top lawyers to continue a symbolic march into the capital of Ankara, ending a more than 24-hour standoff between the lawyers and police, The Associated Press reported.

The heads of some 60 regional bar associations in Turkey embarked on a march to Ankara wearing professional robes to protest the government’s plans to amend laws regulating lawyers and bar associations, including the way the associations elect leaders.

The lawyers say the changes are aimed at reducing the clout of the bar associations, many of which are outspoken critics of President Recep Tayyip Erdoğan’s government.

Police on Monday blocked the group on a highway at the entrance of Ankara, saying the march was unauthorized and in breach of measures in place due to the coronavirus pandemic.

Scuffles broke out between police and the lawyers, who later staged a sit-in that lasted through the night and heavy rainfall.

Police on Tuesday lifted barricades to allow the lawyers to walk some 300 meters into the city. The group was later let on to buses that took take them to Mustafa Kemal Atatürk’s mausoleum, where they paid respects to the Turkish Republic’s founder.

Turkish authorities frequently ban protests on security or other grounds, and police are called in to break up demonstrations even though the country’s constitution lists freedom of assembly as a basic right.