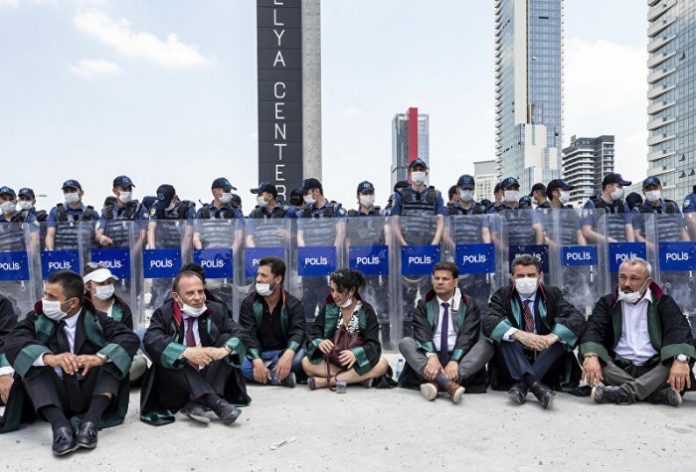 Turkish police stopped dozens of senior lawyers marching to the capital of Ankara on Monday to protest a bill governing the organization of bar associations that they say is aimed at silencing those critical of the government, Reuters reported.

President Recep Tayyip Erdoğan’s ruling Justice and Development Party (AKP) has proposed changes to the associations’ election system that it says will make it more democratic and increase representation from smaller cities.

But the lawyers marching say the move would pave the way for the formation of government-friendly associations.

Most bar associations in Turkey are highly critical of the government and its human rights record and say the judicial system has descended into chaos with lawyers jailed, defenses muzzled and confidence in judges and prosecutors destroyed.

On Monday Ankara police stopped the march by barricading a highway leading to the city, and footage showed the heads of bar associations being pushed and jostled by police.

“Our march to the capital of this country is being stopped for no reason and is completely unlawfully,” Erinç Sağkan, the head of Ankara’s bar association, told reporters.

“It’s a black day for Turkey as its lawyers are blocked from walking into the capital city through violence,” he said. The lawyers started a sit-in following the blockade.

If the bill becomes law, lawyers would also be allowed to form additional bar associations in provinces with more than 5,000 registered attorneys. New associations would need a minimum of 2,000 members.

Lawyers marching say the proposal would limit their associations’ power of oversight. For example, they may hesitate to penalize members who violate ethics if that were to push their association below the minimum membership threshold, they say.

“The government is aiming to form multiple bar associations in the same province, thus creating conflicting associations whose power has been diminished through the old strategy of divide, conquer and rule,” the İstanbul Bar Association said in a statement.

The head of the Union of Turkish Bar Associations, Metin Feyzioğlu, however, questioned whether the marching lawyers were motivated by the legislation or were instead targeting the judiciary, which critics say the government has harnessed in recent years to target political rivals. Erdoğan’s AKP denies the charge.