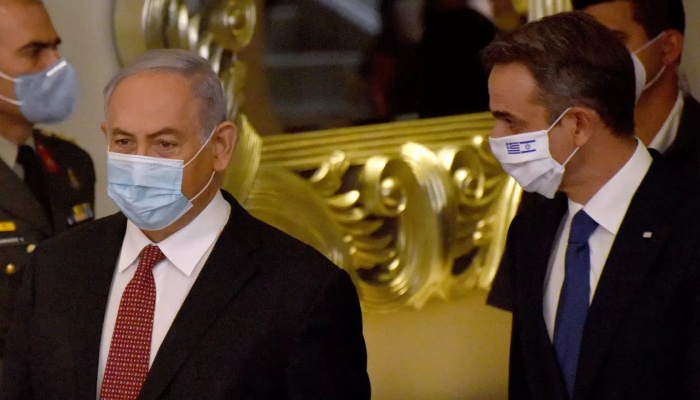 In his first foreign trip since the start of the coronavirus pandemic, Mitsotakis condemned “Turkey’s aggressive behavior in the eastern Mediterranean.”

“We consider this activity to be a threat to regional peace and stability,” Mitsotakis told journalists after meeting with Israeli Prime Minister Benjamin Netanyahu.

Along with Cyprus, Israel and Greece signed an agreement in January on building an undersea pipeline to carry gas from the eastern Mediterranean to Europe.

Ankara is opposed to the deal and has sent ships to search for energy reserves off Cyprus, while last week the Turkish military conducted an air and naval exercise in the eastern Mediterranean.

“I have raised with the prime minister the recent incidents of illegal and provocative Turkish behavior at our sea and land borders,” the Greek premier said, standing alongside Netanyahu.

Mitsotakis also criticized the “destabilizing effects that Turkey has played vis-a-vis its relationship with Libya.”

Ankara backs the UN-recognized Government of National Accord (GNA), based in Tripoli, which for more than a year has battled an offensive by military strongman Khalifa Haftar.

The Turkish government additionally signed a controversial deal last year with the GNA that claimed gas-rich areas of the Mediterranean for Ankara, an agreement deemed “completely null and void” on Tuesday by Mitsotakis.