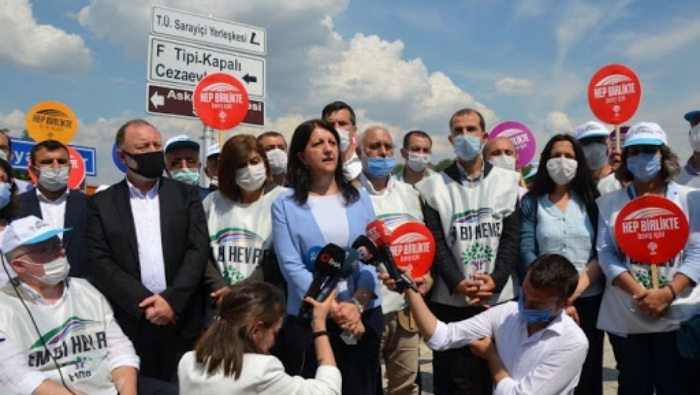 The “March to Protest the Coup against Democracy” kicked off simultaneously from the northwestern province of Edirne and the province of Hakkari at the southeastern edge of the country, heading towards the capital city of Ankara.

Another group gathered in İstanbul’s Silivri district to head for Edirne, where the party’s former co-chair, Selahattin Demirtaş, has been imprisoned since November 2016. The police attacked party members in Silivri, detaining at least 10 people.

During the intervention the police reportedly used tear gas and plastic bullets against HDP members.

“There are millions of us. You cannot stop us,” current HDP Co-chair Pervin Buldan said.

HDP deputies Leyla Güven and Musa Farisoğulları, along with CHP deputy Enis Berberoğlu, were stripped of their parliamentary status on June 5, based on prison sentences handed down to them.

The three were then detained and arrested. Berberoğlu was freed due to a recent COVID-19 early release law, while Güven was released into house arrest.